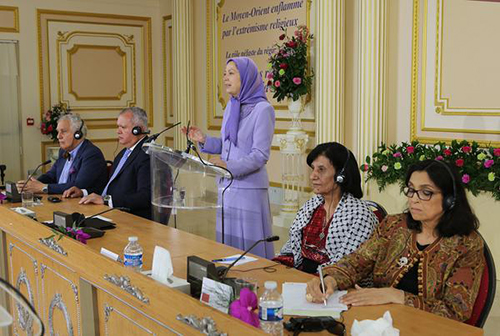 In a conference on June 14, entitled “Middle East Burning in the flames of Religious Extremism, Iranian Regime’s destructive Role, Roots & Solutions”, in which political figures from various countries, in particular Arab and Islamic states, took part, Mrs. Maryam Rajavi, President-elect of the Iranian Resistance, stated that the U.S. strategy against ISIS has failed to succeed because it has ignored the Iranian regime as the core of fundamentalism and has turned a blind eye to the meddling of this regime in Iraq and Syria or has cooperated with this regime.

Mrs. Maryam Rajavi noted that the Iranian regime considers the arming and empowering of Iraqi nationalist and tribal forces – which is the only path out of Iraq’s current impasse – a hundred times more dangerous than ISIS and thus prevents it in any manner possible.

Mrs. Maryam Rajavi added: the Iranian regime is tangled in a whirlpool of three wars in Syria, Iraq and Yemen which has made it extremely weak despite its hollow show of force. In fact, the Iranian regime’s perceived power is due to the weak policies of the United States and other western countries as well as the countries of the region.

Rajavi said that the countries of the region had committed two miscalculations which greatly aided Tehran’s rulers. The first was the misconception that the regime’s meddling could be curbed through tolerance. The second was the misconception that any initiative to confront the Iranian regime must be led by the U.S. These two mistakes deprived the region of a tangible and indispensable unity of action with the Iranian Resistance, and they neutralized regional capacities and capabilities for confronting the Iranian regime’s aggressions.

Noting the Arab coalition formed to confront the occupation of Yemen by the Iranian regime and its proxies, Mrs. Rajavi added: This experience proved that the solution for the regional crisis is exercising firmness against this regime. This policy needs to be implemented across the entire region and sustained until the complete expulsion of the regime and its puppets. Pushing the regime back into its own territory will tremendously expedite its downfall.

In her concluding remarks Mrs. Maryam Rajavi stipulated that the only pathway to overcome extremism is the overthrow of the Iranian regime by the Iranian people and Resistance. To achieve this goal, these three steps are essential:

– Firstly, assisting the Syrian people to overthrow the Syrian dictatorship with an initiative similar to that of Yemen;

– Secondly, eviction of the Iranian regime from Iraq, arming Iraqi Sunni tribes, and genuine participation of Sunnis in the political process;

– Thirdly, supporting the Iranian Resistance as the main opposition to the Iranian regime.

As such, the People’s Mojahedin Organization of Iran (PMOI/MEK) is the foremost political and cultural bulwark against the growth and influence of fundamentalism.

Secretariat of the National Council of Resistance of Iran
June 15, 2015

Iran: Celebrating The 40th Anniversary Of The Start Of The Nationwide Resistance

Mrs. Maryam Rajavi: Installing As President A Mass Murderer And A Criminal Against Humanity Reflects The Regime’s Desperation, Foreshadows The Overthrow Of The Ruling...