The clerical regime’s Ministry of Intelligence (MOIS), after bringing the mercenary Mohammad Ali Hosseini, along with known mercenaries of the regime in Paris which resulted in him turning to a played card, sought to whitewash and revitalize him and to infiltrate and employ him in Arab countries and circles against the Iranian resistance.

The mercenary of this sordid mullah for the Ministry of Intelligence, the terrorist Quds Force and the Lebanese branch of the Iranian Revolutionary Guards (IRGC) and his appearance with the dirtiest agents of the Intelligence Ministry, which was the hasty and panicked reaction of MOIS against the large gathering of the Iranian resistance, was earlier disclosed in the statement of the Security and Anti-terrorism Committee on July 9, 2017.

The following details obtained from within the country provide new plans of the MOIS with respect to this mercenary mullah:

2. In a deceptive measure to justify his trip to Paris, Mullah Hosseini in interviews with some Arab media, claimed that he had traveled to Paris to discuss “roots and causes of terrorism” on the invitation of “French and German groups”, while this trip was fully organized and was financed by the Ministry of Intelligence (MOIS) and had nothing to do with his ridiculous claims.

3. This mercenary who was refusing to comment against the regime and Hezbollah in the past year under the pretext of security concerns, once again on the instruction of MOIS, has resorted to issuing statements against the regime and Hezbollah in recent weeks to whitewash himself and to infiltrate Arab countries and circles. This is a well-known tactic of the Ministry of Intelligence that is trying to give its mercenaries a reputation for opposing the regime.

4. On the other hand, the MOIS in recent weeks has expanded the contacts between Mullah Hosseini and mercenaries and agents in Paris, Brussels, and Beirut and has given the Lebanese mullah the mission to travel to Brussels in order to confront the widespread opposition of the members of European Parliament and Belgian Parliament to human rights violations in Iran and their support for the Iranian resistance with the help of few other foreign paid agents and a number of mercenaries such as Ghorbanali Hossein Nejad, Gholamreza Sadeghi Jebeli, Davood Baghervand and Batool Soltani. Jebeli is a mercenary who was sent to Ashraf in 2008 to persecute the Mojahedin, and was arrested by US forces and the Iraqi police. He was arrested and sentenced in Canada in the following years for child kidnapping. Photographs and documents are attached.

5. The Ministry of Intelligence seeks to establish a center in Europe via this mercenary mullah and aims to recruit a number of employees in order to work against the PMOI and its supporters, especially among Arabs under the pretext of anti-terrorism.

6. According to the Ministry of Intelligence’s plan, Mullah Hosseini is supposed to work with a number of Ahwazi MOIS agents and mercenaries who are falsely pretending to be defending our deprived Arab people against the Iranian resistance. They regard the PMOI as anti-Ahwazi people with chauvinistic tendencies.

7. The Ministry of Intelligence has commissioned the Lebanese cleric to put some of the other MOIS mercenaries as opponents of the regime in touch with Arab countries and circles.

The Security and Anti-Terrorism Committee, reminding that the undeniable documents proving Mullah Hosseini’s mercenary activities and extortion can be presented in any court, warns against the dirty conspiracies of the mullahs’ MOIS and terrorist Quds force through him against the Iranian resistance and neighboring countries.

1. Mullah Hosseini lived in Qom for about a decade and was a member of Hezbollah. After coming out of Iran and declaring a position against Hezbollah, in solidarity with the People’s Mojahedin Organization of Iran (PMOI) he vowed to “confront terrorism and religious tyranny that is symbolized in the regime of Velayat-e-Faqih in Iran” and stressed that “he considers any closeness to this regime and its mercenaries as a great betrayal”. (August 28, 2007) In the following years, he reiterated his commitment in his own writing and signature including on September 29, 2008, October 23, 2014 and June 2, 2015.

2. Ashraf and Liberty residents, despite being under an inhuman siege, at the request of the said mullah who was looking for “financial help for Bani Hashem seminary in Lebanon” and assistance for anti-Iranian regime Shiites, provided assistance to him (Receipts are available and can be published). When he was arrested in Lebanon, the PMOI paid all his legal costs and rushed to fully support him. But this sordid mullah plainly broke his commitments and in an email on March 13, 2017 declared them null and void. At the same time he resorted to daily blackmail of the PMOI and threatened he would only leave Mojahedin alone if they paid him $30,000 in a week. Mojahedin did not pay attention to his blackmail and cut ties with him. Some of the blackmail documents are available.

3. The mullahs’ MOIS used him on July 8, 2017 to demonize the Iranian resistance, along with known agents of the MOIS in Paris. The Lebanese cleric in the gathering of the mercenaries repeated word for word the claims of the clerical regime against the Mojahedin and said:

• For the Mojahedin, their political goals were more important than the lives of residents in Ashraf and they wanted to do business with every humanitarian issue in Ashraf … Mojahedin themselves would send messages to fire missiles at Liberty…

• Mojahedin do not pray … during the fasting time, they were saying they were fasting but they would eat and drink …

• When I realized what terrorist acts the Mojahedin have committed, I was shocked. They were not different that the regime.

• Now the holy mission is the (issue of) the deceived in Albania. We have to attract them. I swear to God they are disintegrating… they don’t know the reality…Our most important task is to save these people from hell.

Some documents about extorting of this infamous mullah from the PMOI 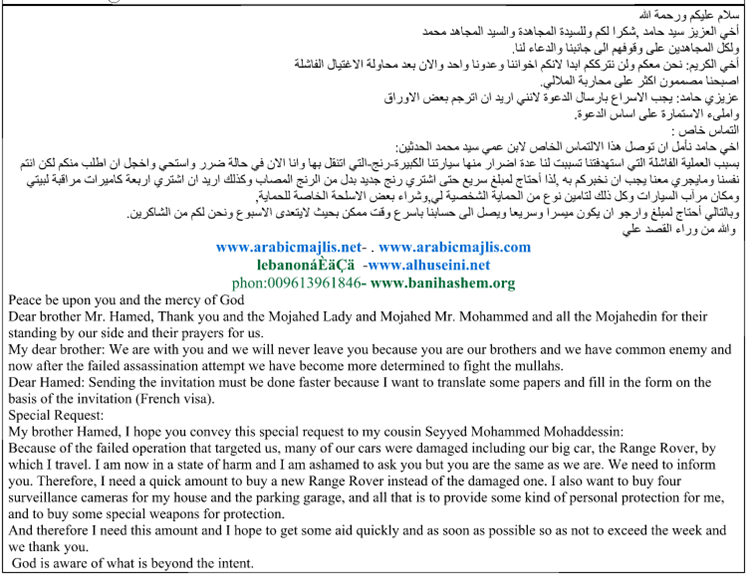 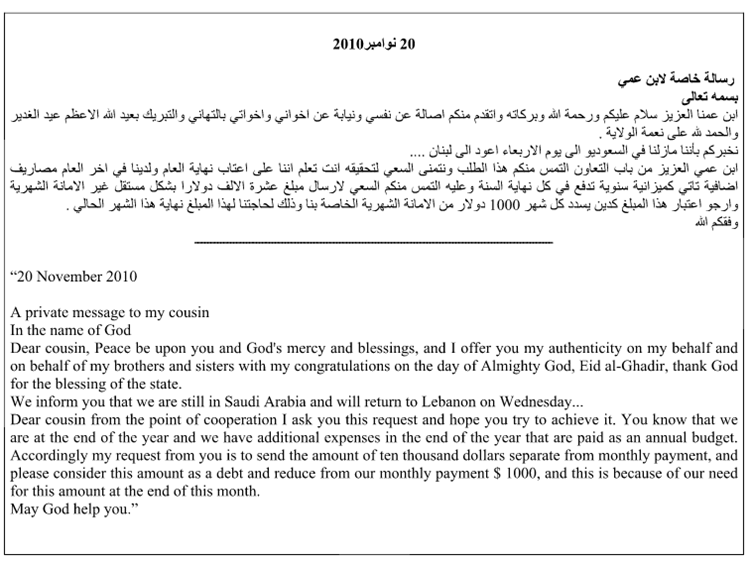 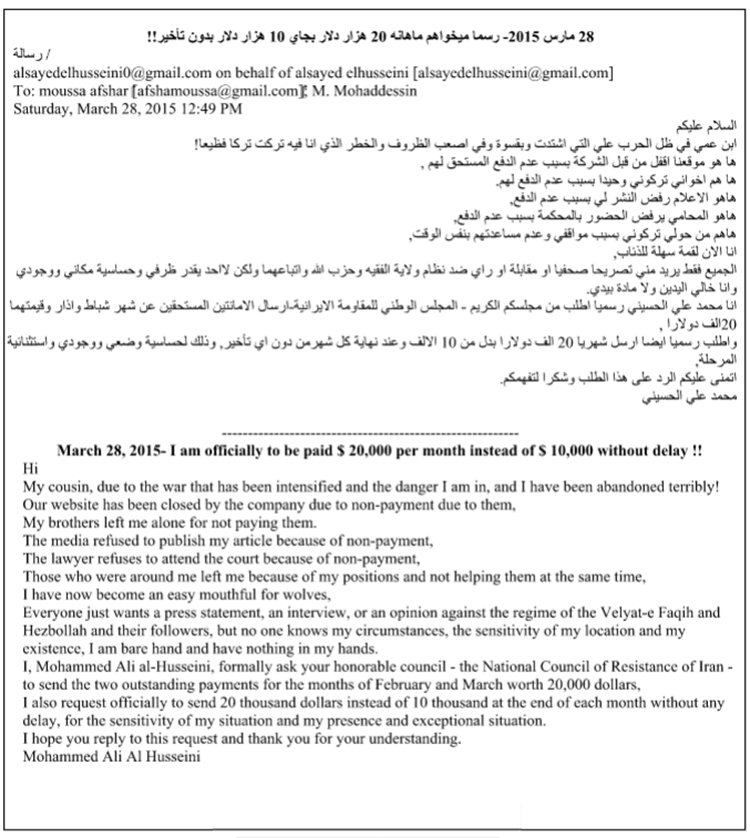 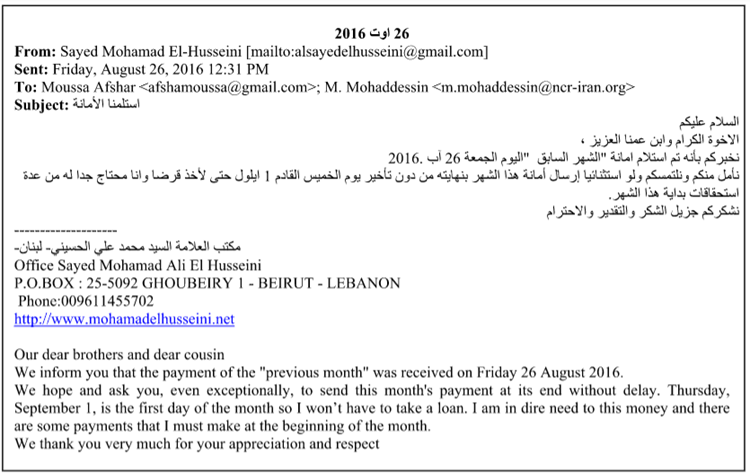 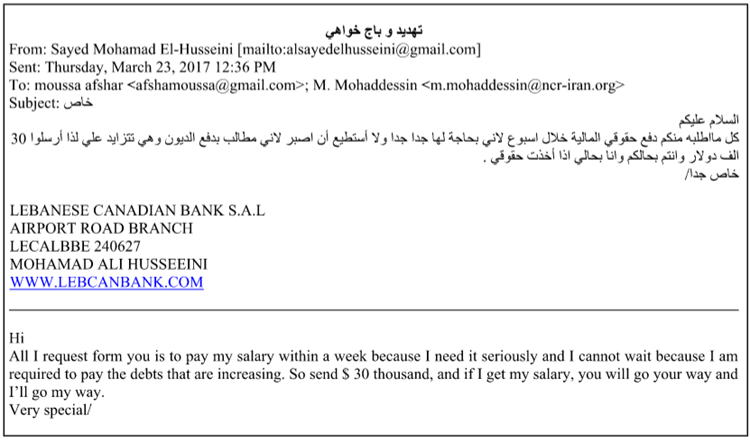 Previous articleIran Regime’s Energy Minister: There Is No Region Spared of Water Concerns
Next articleIran: Moving Forward With the Correct Western Policy