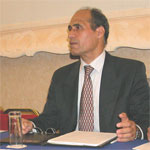 The Iranian Resistance condemned the detention of Mr. Abdolfattah Soltani, the counsel for Akbar Ganji and the family of Zahra Kazemi, murdered under brutal torture about two years ago in Evin Prison. It called on international human rights organizations to secure the release of Mr. Soltani and other political prisoners.

The clerical regime’s suppressive forces raided the Bar Association office in Tehran and detained Mr. Soltani, a member of the Association’s board of directors, who had staged a sit-in there.
On Sunday, Judiciary spokesman Jamal Karimi-Rad made the ridiculous claim that Mr. Soltani had been charged with "disseminating secrets and documents on Iran’s nuclear activities." Mr. Soltani has been transferred to Evin Prison’s ward 209, which is run by the Ministry of Intelligence and Security (MOIS).
Dr. Sanabargh Zahedi, Chairman of the Judiciary Committee of the National Council of Resistance of Iran, strongly condemned the arrest of Mr. Soltani. "From the outset, the clerical regime disregarded the right to counsel and lawyers and viewed them as nuisance to its suppressive judicial system. For their part, Iranian lawyers undertook widespread efforts to expose the ruling regime’s enmity to fundamental rights and law.
In the past years, a large number of Iranian lawyers and jurists have been executed, murdered or died due to intolerable pressures. Lawyers and jurists, including Shokrollah Paknejad, Manouchehr Massoudi, Mohamoud Bani Najjarian, Reza Khaksar and Zia Moddaressi, were killed after being viciously tortured. Dr. Kazem Rajavi and Abuzar Vardasbi, also jurists, were murdered by the regime. Amin Amini and Manouchehr Gha’em Maghami were murdered by the MOIS. Abdolhamid Ardalan, President of Iran’s Bar Association, died due to intolerable pressures. Hundreds of lawyers have been detained and imprisoned or debarred in the past few years. Mr. Nasser Zarafshan, jailed for some time now, is a vivid case of the Iranian regime’s mistreatment of lawyers.
The mullahs’ medieval regime has trampled on the rights of Iranian people and particularly the rights of political prisoners to counsel. At least 120,000 political prisoners have been either executed or killed under torture while denied the right to defend themselves or the presence of a counsel.
NCRI’s Judiciary Committee Chairman urged all lawyers and his colleagues to voice protest against the mullahs’ suppressive judicial system and focus their attention on securing the right of the Iranian people to counsel, something which could only become a reality after this anti-human regime is toppled.
Dr. Zahedi called on the United Nations Human Rights Commission, lawyers, jurists, Bar Associations, jurists and lawyers associations, as well as human rights organizations and bodies across the world to protest against the execution, torture of and increasing pressures on Iranian lawyers.
Secretariat of the National Council of Resistance of Iran
August 3, 2005