Iran: Protest Rally of Retirees against poverty and the dire situation of livelihood and high costs 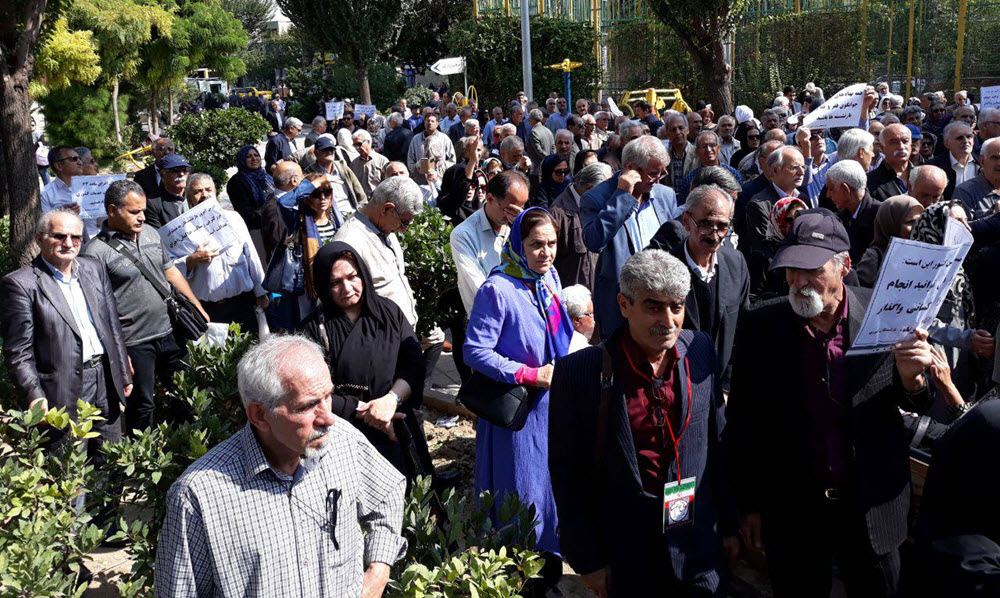 On the morning of Tuesday, October 16, a large group of retirees protested in front of the regime’s program and budget organization in Tehran. Protesters from different provinces, including Fars and Kermanshah, have come to Tehran to demand raising their salaries in line with inflation and the poverty line, implementation of coordinated payment system, balancing their salaries, and paying their efficiency insurance premiums.

The crowds chanted slogan: “Imprisoned teachers must be freed, imprisoned students must be freed, prison is not the place for teachers, cry from all this injustice, the poverty line is six million; our salaries are two million.” According to government news agencies, the protesters said that the salaries they receive do not even cover 10 days of their expenses in a month. The regime officials have announced in the past few months that retirees have lost more than two-thirds of their purchasing power. This is despite the fact that their purchasing power has fallen even lower over the past few months.
On October 14 and 15, teachers and educators across the country refused to go to go to classes and staged sit-ins to get their minimum rights. The regime arrested a number of teachers to prevent the spread of this sit-in. In some cities, teachers chanted imprisoned teacher must be freed.

Students also supported their teachers in various cities, including Karaj, Qom, Qeshm, Ahvaz and Langroud. At the same time, a group of students, including some in Allameh University and the Faculty of Social Sciences of the University of Tehran, gathered in support of the demands of the striking teachers. They had hand written banners saying: “Imprisoned teachers must be freed; imprisoned students must be freed; teacher, worker, student, unity, unity!”

In another development, on October 16, deprived farmers of Varzaneh in the province of Isfahan, in protest to the cutting of their water right and the treacherous policies that led to the drying up of Zayandeh Rood and destroying their life and agriculture, protested for a number of successive days. They sarcastically wrote in a banner addressing Rouhani: Do not do any more to revitalize Zayandeh Rood!

Hundreds of workers from the municipality of Sushtar, whose salaries and bonuses have not been paid for months, protested in front of the municipality’s building for the second day.

Previous articleWhere Will Iran Regime’s Terror Plots Strike Next?
Next articleRouhani Described the Only Glimmer of Salvation for Iran Regime as “Hope Therapy”

Prices of Bread, a Staple Food Item for Majority of Iranians, See a Staggering Rise; Inflation and Shortage of Flour in Iranian Cities; Closure...

In recent weeks, the price of bread, a major food staple for the overwhelming majority of the Iranian people, has jumped 30% to 100%...
Read more
Statements

In the early hours of Saturday, October 17, 2020, defiant youths targeted several centers of repression of the clerical regime in the cities of...
Read more
Search