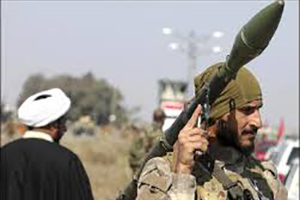 NCRI – The Iranian regime president Hassan Rouhani, speaking at the Ministry of Defense on Saturday, August 22, stated that he is not bound by UNSC Resolution 2231. This resolution “does not hinder our work. We purchase and shall purchase weapons from wherever we see fit and we shall not wait for anyone, seek permission and confirmation from anyone, or look to any resolution for it,” Rouhani stipulated. Referring to the construction of a new missile called Fateh 313, Rouhani stated: “Our situation is peculiar; in such a situation we should beef up our military industry… Our agreement with the world is not that our armed forces thwart their efforts in building up their capabilities, to refrain from taking steps in their strategy and their goals… so that we reach all the objectives that we envision”.

Under the pretext of weapons sale, Rouhani reassured regime’s proxies in the region that transfer of weapons to them would continue. He said: “If we see fit somewhere to sell weapons, we shall do it without any considerations, any resolutions; we shall sell our weapons.”

Such statements clearly demonstrate that the Iranian regime shall never forgo its export of terrorism and fundamentalism and that flexibility towards this regime to the detriment of peace and tranquility in the region encourages the Iranian regime in its aggressions and warmongering. A week ago, Khamenei’s advisor Velayati assured regime’s elements that had assembled in Tehran that the regime “will have more capability in collaborating and supporting its friends in the region” (ISNA state news agency – August 15, 2015).

Rouhani’s remarks today also goes to prove this reality that the funds to be given to the regime in the nuclear accord will not at all serve Iran’s national interests or advance the economy and improve people’s livelihood. Mrs. Maryam Rajavi, President-elect of the Iranian Resistance, declared on July 14, immediately after the nuclear deal was sealed, on the need for “United Nations’ strict monitoring of the cash poured into the regime’s pockets so that it would be spent on the Iranian people’s urgent needs, especially to pay for the unpaid meager salaries of workers, teachers and nurses and provision of food and medicine for the populace. Otherwise, Khamenei would continue to fund the IRGC to export terrorism and fundamentalism to Iraq, Syria, Yemen and Lebanon” and before all else the money would fill the already swollen pockets of regime’s IRGC.

Secretariat of the National Council of Resistance of Iran
August 22, 2015

Velayati: Iran more powerful to back Assad after nuclear deal

The Committee on Security and Counterterrorism of the National Council of Resistance of Iran (NCRI) makes public the enlightening letter by a former operative...
Read more
Statements: Terrorism & Fundamentalism

Maryam Rajavi: Conviction of the regime’s terrorist diplomat in the Belgian Court of Antwerp represents the conviction of the entire clerical regime Shut down...
Read more
Statements: Terrorism & Fundamentalism

“Our transactions are covert, not transparent. $80 billion in imports and exports are covert transactions; from the day after joining the FATF, front...
Read more