Iran: 4 hangings and 5 death sentences in one week 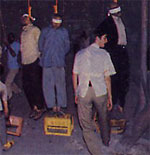 The wave of executions in Iran continues unabated six months after Mahmoud Ahmadinejad assumed power as president of the Iranian regime. In the past week, state-run newspapers reported four executions and five death sentences, one a woman, issued by the clerical regime’s courts in Iran.
Javan newspaper reported on January 5 that Majid Bagherzadeh, Amir Reza Sabihi, and an Afghan national, Gholamali Ahmadi, were hanged in the morning of January 4 in Evin Prison in Tehran. State-run IRNA news agency reported on December 29 that Eskandar Meraji, 30 years old, was hanged in public in Ilam city in western Iran.
Kayhan reported on January 5 that the regime’s criminal judiciary issued death sentences to two men and a woman in Ghazvin, northeastern Iran. Sharq newspaper also reported on January 3 that the regime’s Supreme Court upheld a death sentence for a man identified as Alireza. The regime’s ISNA news agency reported on January 2 that the Supreme Court also upheld a death sentence for Ahmad Efati.
The Iranian Resistance condemns the unprecedented rise in the wave of brutal executions in Iran since Mahmoud Ahmadinejad assumed power as the regime’s new president. The executions are meant to intimidate and terrorize the general public. The Iranian Resistance calls for urgent international measures to stop the executions, and in particular calls for the clerical regime’s record of gross human rights violations to be referred to the United Nations Security Council.
Secretariat of the National Council of Resistance of Iran
January 6, 2006