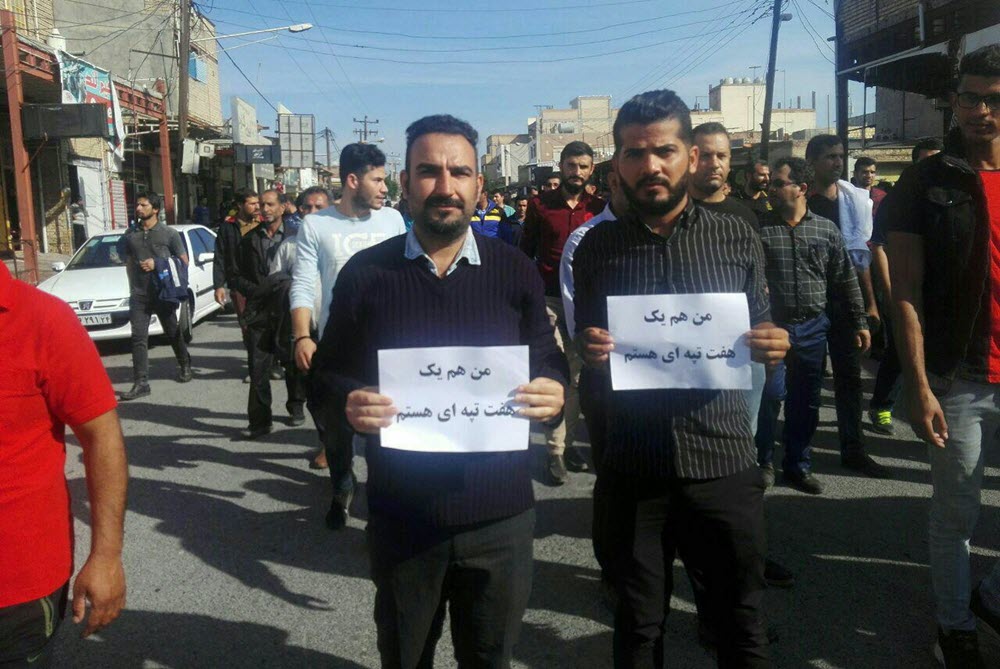 Maryam Rajavi: Call for support of the Haft Tappeh and Ahvaz Steel strikers and urgent action to release the arrested

Mrs. Maryam Rajavi, President-elect of the Iranian Resistance, saluted the striking workers of the Haft Tappeh Sugar Cane factory and Ahvaz Steel, and said: “Shoosh has risen with the cries of workers, and solidarity and strike of youth, teachers and merchants of bazaar. The enemy attempts in vain to silence the Haft TAppeh deprived workers by suppressing and arresting them, but the cry of “we are hungry, hungry” of the children of Shush, calls the conscience of every human being to rise up against the oppressor mullahs.

Mrs. Rajavi called on all youth, especially in Khuzestan, to support the uprising of Shush and the Haft Tappeh and Ahvaz Steel strikers, and urged international human rights defenders and labor and trade unions to condemn the repressive measures of the religious fascism ruling Iran against the workers and to take urgent action for the immediate release of the arrested.

On Sunday November 18, the protest of the brave workers of the Haft Tappeh Sugar Cane was held on the fourteenth day of their strike, with extensive support from marketers, teachers, workers’ families, and students from the city of Shush. Following the gathering of protesters in front of the regime’s governorate in Shush, repressive forces arrested at least two workers’ representatives. At least one of the workers was also wounded by the criminal plainclothes agents.

The massive demonstrations of steel and sugar cane workers began on Sunday despite the presence of the suppressive forces. On the protest rally, shopkeepers shut down their businesses and joined the rally. The protesters chanted: “Shaft Tappeh, (Ahvaz) Steel, we will stand together till the end; Steel; Haft Tappeh, happy bond!; honorable marketer, support, support; Worker, teacher, unity, unity; Down with the oppressor, hail to the worker; the worker dies, he does not accept humiliation; Do not be afraid, do not be afraid, we are all together; Neither threat, nor prison, has no longer any effect; No threat, no surrender; we are all together; we do not go to our house until we take our rights; our enemy is here, they falsely say it is the United States.”

The people who joined the workers had handwritten banners in their hands, reading: “I am also a Haft Tappeh (worker).”

It was written on the handwritten banners: Stop illegal labor contracts; stop exploiting workers; a hungry child does not recognize promises; I’m just a worker, I’m not a thug; I love my homeland; but my child is hungry.

Referring to the threats of the repressive forces, the workers’ representative said: “If I die, too, you do not have the right to bury me. You must bring my coffin to the strike. My dead body also chants: “No threats, no surrender, we are all together”. Massive crowds repeated this slogan, reiterating their resolve to continue their protests.

Meanwhile, the Ahvaz Steel courageous workers continued their strike for the second week in protest to non-payment of their four months’ salaries and benefits, and expressed their solidarity with the workers of Haft Tappeh Sugar Cane factory. On the protest rally from the factory to the regime’s governorate in Ahvaz, they chanted: “No nation has ever seen this much injustice; The premier and the governor, are collaborators of this mafia; Haft Tappeh Sugar cane, we are present and we stand together; our country is a thief house; it is exemplary in the world!; the worker dies, he does not accept humiliation.”

Secretariat of the National Council of Resistance of Iran
November 18, 2018