IRAN: Expansion of protests and clashes in various sections of Tehran 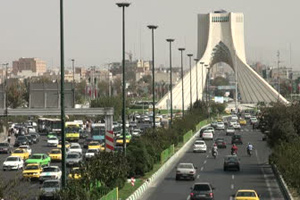 NCRI – The people in Ekbatan Township, western Tehran, staged a protest against a spying and suppressive center demagogically dubbed House of Quran in this district.

Despite repetitive protests by the people of this district and albeit the verdict of regime’s own Administrative Justice Court that forbade the construction of this center, the joint land between residential complexes were usurped and this spying center was established.

The construction of this spying center was supported by the mayor of District 5 of Tehran that much like other mayors of other Tehran districts is a commander and element of suppressive bodies and affiliated with Tehran’s Mayor IRGC Brigadier General Mohammad Baqer Qalibaf.

Thursday night, July 2, following the gathering of people in front of this building, the Basij hirelings began insulting, battering and injuring the people. One of the residents was transferred to hospital’s ICU because of his injuries.

In another development on Sunday, July 5, a number of shop owners who sell electric products in Amjad shopping center in Jomhouri Street clashed with the security forces who intended to disturb the shop owners on the pretext of failing to observe fasting. The security forces that wanted to seal up all of the shops were forced to leave the place after sealing a few shops despite calling in backup forces in fear of the rage showed by the shopkeepers.
The youth in Sadra Township, Olympic Village, Ferdos Boulevard, and a number of other places west of Tehran brought down signs and placards put up by Basij hirelings that called on people to voluntarily hand over their satellite dishes. The youth demonstrated their loath for regime’s policies of censorship and repression. The Basij force collected the banners that were torn up by the people in this area.

Secretariat of the National Council of Resistance of Iran
July 6, 2015

Previous article
Maryam Rajavi: Iran’s regime is source of extremism in the region
Next article
Iran state TV broadcasts its fear of the PMOI (MEK)