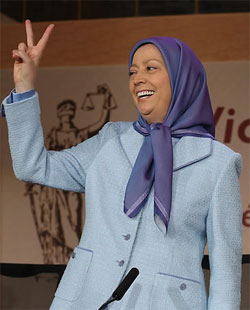 Mrs. Maryam Rajavi, the President-elect of the Iranian Resistance welcomed the European Union’s decision to expand sanctions against the Iranian regime as an essential step to preclude this regime from acquiring nuclear weapons, and asked for cutting all economic and commercial relations with the religious fascism ruling Iran.

She underscored the fact that Iran’s imports and exports are predominantly controlled by the IRGC, and hence the EU’s economic relations with Iran practically contribute to suppressing people, nuclear projects, and the massacre of Syrian people by the IRGC.
Mrs. Rajavi pointed out that obtaining nuclear weapons is part of the religious dictatorship’s strategy for survival, which it will never abandon. Therefore, although comprehensive sanctions are an essential and indispensible element to stop the clerical regime’s nuclear weapons project, the ultimate and definitive solution for the world community to rid itself of the terrorist mullahs’ attempt to acquire nuclear weapons is a regime change by the Iranian people and Resistance. Thus, recognizing the Iranian people’s efforts to overthrow religious fascism and to establish democracy in Iran is more essential than ever.
Secretariat of the National Council of Resistance of Iran
October 15, 2012