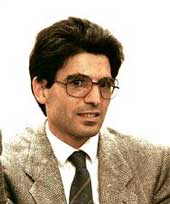 Maryam Rajavi calls for an international tribunal to try Khamenei, Rafsanjani and Khatami for terrorist attacks by the mullahs' regime

The Criminal Court of Rome began this morning the trial in absentia of an official of the Iranian regime accused of being one of the killers of Mohammad Hossein Naghdi, the representative of the National Council of Resistance of Iran in Italy, on March 16, 1993.

Mr. Naghdi, who defected to the NCRI when he was the Iranian charge d'affaires in Italy in 1981, was murdered by a terrorist squad belonging to Iran's Ministry of Intelligence and Security (MOIS).

The role of the Iranian embassy in Italy and the mullahs' terrorists working under diplomatic cover was evident from the beginning and the Iranian Resistance revealed some secret information it had obtained from inside the Iranian regime.

Mrs. Maryam Rajavi, the Iranian Resistance's President-elect, said in a message to the Italian judiciary as the trial opened, "The Iranian people have been waiting for 13 years for the day when the masterminds and perpetrators of Mohammad Hossein Naghdi's assassination would be brought to justice. Today, the Italian justice is facing a historic challenge."

She urged the honorable and courageous judges in Italy to identify and issue international arrest warrants for the masterminds of the assassination and withstand the political and diplomatic pressures and the obstacles that the mullahs' regime is bound to create in order to deviate the course of justice.

Mrs. Rajavi called on the government, prosecution service, security and police services in Italy to extend the necessary cooperation and provide the court with all the information and evidence it requires.

The Iranian Resistance' President-elect underlined the need for binding international decisions against the mullahs' regime for its crimes against humanity, including the execution of 120,000 political opponents, torture of prisoners, hundreds of terrorist operations outside Iran, and the systematic suppression of women and ethnic and religious minorities. She called for the indictment of Khamenei, Rafsanjani and Khatami by an international tribunal.

A Berlin court ruled in 1997, after a four-year-trial, that a committee made up of Supreme Leader Khamenei, then-President Rafsanjani, then-Foreign Minister Velayati, and then-Intelligence Minister Fallahian gave the orders for the assassination of dissidents outside Iran and called for their arrest.