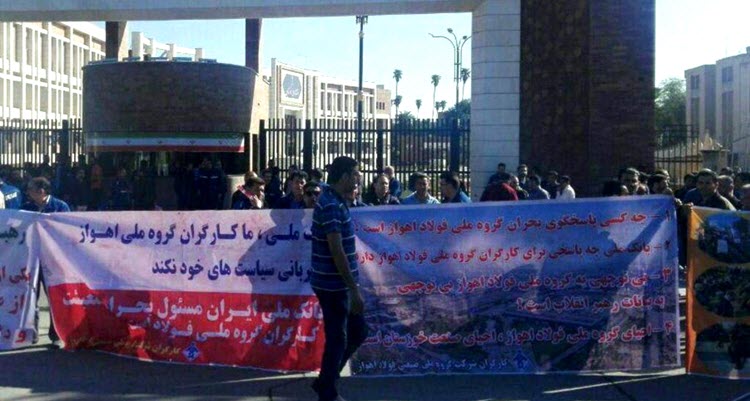 On Thursday, March 1, on the verge of Nowruz, the Iranian New Year, workers and employees of the Ahvaz National Steel Group gathered in front of the governorate of the city on the tenth day of their strike. They are asking for their three month delayed salary, insurance premium, and end-of-year bonus. They are deprived of medical services because they have not received their insurance premiums.

The workers chanted in their protest rallies: Death to the oppressor. The protesters carried placards reading: who is responsible for the crisis in the Ahwaz national Steel Group?

Workers unable to meet their basic life necessities, especially on the verge of Nowruz, depicted the difficult situation of their lives on Tuesday with laying an empty dinner tablecloth on the street. However, the owner of the Ahwaz Steel, who is a government affiliated big thief, refrains from paying the small salaries of the workers.

Ahvaz Steel was privatized and handed over to the affiliates of the mullahs’ regime in 2009, and two years later, it was handed over to the Bank Melli following a massive 3 billion toman (Iranian currency) embezzlement. After pocketing 400 million tomans from the property of the firm in March 2017, Bank Melli auctioned it at a low price. Astronomical embezzlements and catastrophic economic policies of the regime have stopped production at the National Steel Group leading to deprivation and unemployment of its workers.

Secretariat of the National Council of Resistance of Iran
March 1, 2018