10 prisoners hanged in Iran in new wave of executions 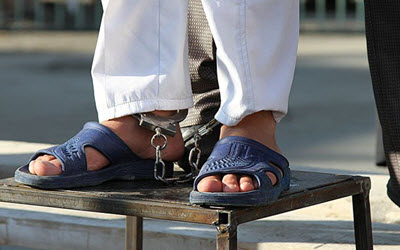 NCRI – Iran’s fundamentalist regime has hanged at least 10 people in prisons since the weekend, in what has been described as a new wave of executions.

Earlier on Wednesday at least six other death-row prisoners in Ghezelhesar Prison in Karaj, north-west of Tehran, were transferred to solitary confinement for their imminent execution.

The regime’s judiciary in Mazandaran Province announced that a 27-year-old prisoner identified by the initials Z. Ch. was hanged in a prison in Sari, northern Iran, on Sunday, April 24. Earlier in the week, the judiciary had announced that a second 27-year-old prisoner, identified only by the initials H. H., was also hanged in prison in Sari on Sunday.

Elsewhere, the regime’s judiciary in Qazvin Province announced that an unnamed man was hanged in Qazvin Central Prison, north-west of Tehran, on Tuesday.

Three of those executed in Zahedan were identified as: Jamshid Dehvari, 30; Sadeq Rigi, 35; and Mohammad Sanchouli, who is believed to have been 22 years old.

Mr. Sanchouli had been behind bars for the past five years including time he served in the prison’s ward for juveniles. He is believed to have been under 18 at the time of his arrest.

The hangings bring to at least 46 the number of people executed in Iran since April 10. Three of those executed were women and one is believed to have been a juvenile offender.

Ms. Federica Mogherini, the High Representative of the European Union for Foreign Affairs and Security Policy, was in Tehran on April 16 along with seven EU commissioners for discussions with the regime’s officials on trade and other areas of cooperation.

Her trip was strongly criticized by Mohammad Mohaddessin, chairman of the Foreign Affairs Committee of the NCRI who said: “This trip which takes place in the midst of mass executions, brutal human rights violations and the regime’s unbridled warmongering in the region tramples on the values upon which the EU has been founded and which Ms. Mogherini should be defending and propagating.”

The NCRI in a separate statement on Sunday warned that 10 death-row prisoners, transferred to solitary confinement in Gohardasht (Rajai-Shahr) Prison in Karaj and Zahedan Prison, are at imminent risk of execution. It called on international human rights organizations to take urgent action to save their lives.