100 French lawmakers urge Hollande to be firm on Iran 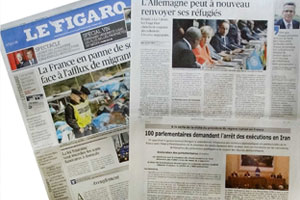 NCRI – Only days before the upcoming trip to France by the Iranian regime’s President Hassan Rouhani, more than 100 French lawmakers from across the political spectrum on Thursday published a statement in the daily Le Figaro urging President François Hollande to make improved France-Iran diplomatic and trade ties contingent upon an improvement of human rights in Iran, including a halt to executions, the release of political prisoners and respect for democratic freedoms.

The French lawmakers said the Tehran regime is a source of regional crisis and is not a part of the solution. A free and democratic Iran is a prerequisite for stability in the region, they added.

The following is the text of the declaration signed by more than 100 French Parliamentarians:

Lawmakers’ declaration, published in Page 4 of Le Figaro on November 12, 2015:

The worsening crisis in the Middle East and the expansion of Islamic fundamentalism which are illustrated by the terrorist atrocities by ISIS (IS, ISIL, Daesh) in Syria and Iraq require a determined and relentless international response. France has and will continue to play its part.

Following the international agreement on the Iranian nuclear program in which we supported and appreciated the firm position of France, some observers are evaluating the role Iran could play in the settlement of this crisis.

The reality is that Iran, far from being a solution to this crisis, is largely responsible for it, and since the establishment of the “Islamic Republic” in Iran by Khomeini it has for more than three decades been the primary source of instability in the region. Its support for Bashar al-Assad in Syria, Hezbollah in Lebanon, the Houthi militias in Yemen, its position in the Israeli-Palestinian conflict, and its interventions in Iraq under the Al-Maliki government are major examples but, alas, they are neither the only cases nor the last of them.

The reality is that the theocracy ruling Iran has not changed in thirty years and through its nature continues to fuel fundamentalism in the region. The savagery of ISIS cannot overshadow nor cast aside this historical reality.

The reality is that the human rights situation in Iran has continued to deteriorate and is now denounced by the United Nations and NGOs such as Amnesty International. Thus, the Rouhani presidency, which is billed as moderate, to date has in its record exceeded the figure of 2000 executions.

Also, in these circumstances, the signatories of this appeal:

1. Recall that the regime in Tehran is the source of the crisis in the region and not the solution and that its eviction from Syria and Iraq is an essential condition for sustainable eradication of Islamic fundamentalism and extremism in this sensitive part of the world.

2. Consider that a free and democratic Iran is essential for stability in the region and it is therefore necessary to support the Iranian Resistance whose ten-point program for regime change presented by Maryam Rajavi, President of the National Council of Resistance of Iran (NCRI), advocates a democratic and non-nuclear Iran based on separation of church and state, equality between women and men and peaceful coexistence with its neighbors.

3. Call upon the French Government to make the development of diplomatic and commercial relations between France and Iran conditional upon an improvement in the human rights situation in that country, with a moratorium on executions, the release of political prisoners and respect for democratic freedoms.

4. Request that the protection of Iranian dissident refugees at Camp Liberty in Iraq be assured and guaranteed by international institutions and in particular that the inhumane blockade, including the medical siege, on the camp, which must be recognized as a refugee camp by the UN, be entirely lifted. 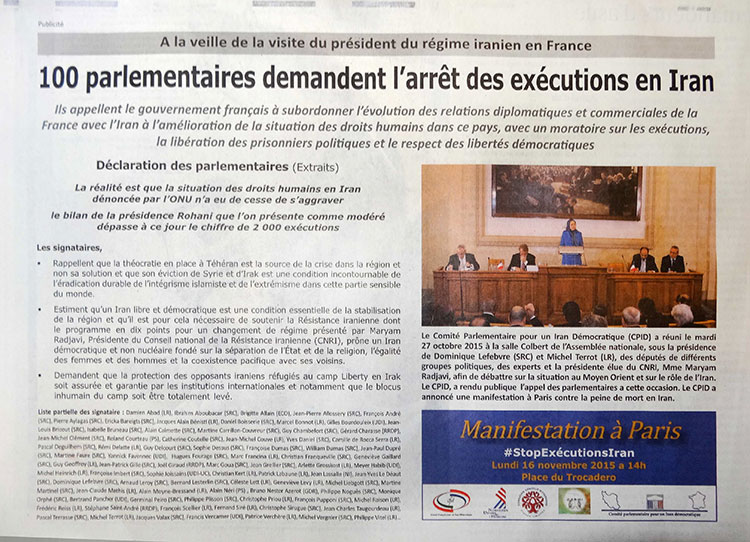