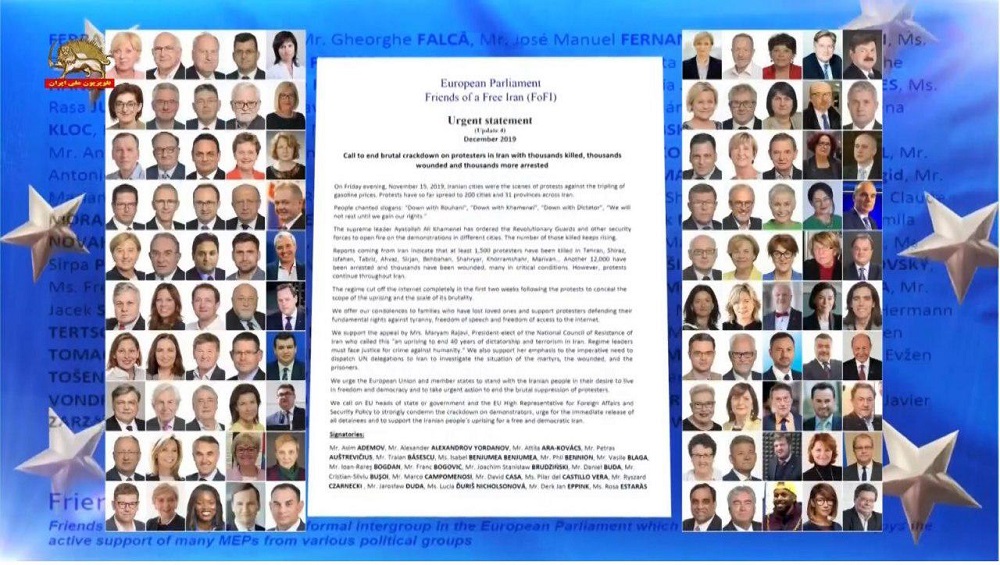 Below is the full text of a statement by the Friends of a Free Iran (FOFI) inter-group at the European Parliament:

Call to end the brutal crackdown on protesters in Iran with thousands killed, thousands wounded and thousands more arrested

On Friday evening, November 15, 2019, Iranian cities were the scenes of protests against the tripling of gasoline prices. Protests have so far spread to 200 cities and 31 provinces across Iran.

The supreme leader Ayatollah Ali Khamenei has ordered the Revolutionary Guards and other security forces to open fire on the demonstrations in different cities. The number of those killed keeps rising.

Reports coming from Iran indicate that at least 1,500 protesters have been killed in Tehran, Shiraz, Isfahan, Tabriz, Ahvaz, Sirjan, Behbahan, Shahryar, Khorramshahr, Marivan… Another 12,000 have been arrested and thousands have been wounded, many in critical conditions. However, protests continue throughout Iran.

The regime cut off the internet completely in the first two weeks following the protests to conceal the scope of the uprising and the scale of its brutality.

We offer our condolences to families who have lost loved ones and support protesters defending their fundamental rights against tyranny, freedom of speech and freedom of access to the internet.

We support the appeal by Mrs. Maryam Rajavi, President-elect of the National Council of Resistance of Iran who called this “an uprising to end 40 years of dictatorship and terrorism in Iran. Regime leaders must face justice for the crime against humanity.” We also support her emphasis on the imperative need to dispatch UN delegations to Iran to investigate the situation of the martyrs, the wounded, and the prisoners.

We urge the European Union and member states to stand with the Iranian people in their desire to live in freedom and democracy and to take urgent action to end the brutal suppression of protesters.

We call on EU heads of state or government and the EU High Representative for Foreign Affairs and Security Policy to strongly condemn the crackdown on demonstrators, urge for the immediate release of all detainees and to support the Iranian people’s uprising for a free and democratic Iran.

Previous articleDay 43 of Iran Protests: Martyrs of the Nationwide Uprising Honored in Memorials Despite Unprecedented Security Measures
Next articleIran: Torching Centers of Suppression, Khamenei’s Pictures on 40th Day Memorial for Martyrs of the Uprising

Secretariat of the National Council of Resistance of Iran (NCRI) - 9th July 2020
The Iranian regime's Ministry of Intelligence and Security (MOIS) and the Judiciary have begun to arrest and issue prison sentences for the supporters and...

Secretariat of the National Council of Resistance of Iran (NCRI) - 9th July 2020
At least 350 people have died to Coronavirus in the past seven days in Shiraz The Health Ministry announced an unprecedented rise of...