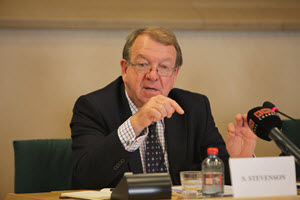 NCRI – Struan Stevenson, a former chairman of the European Parliament’s Delegation for Relations with Iraq and currently president of the European Iraqi Freedom Association (EIFA), told a meeting at the European Parliament in Brussels on Thursday that the Iranian regime is the source of the crises in Iraq and Syria. He addressed a panel of the EP’s Delegation for Relations with Iraq alongside a delegation of Iraqi lawmakers who were visiting Europe.

DELEGATION FOR RELATIONS WITH IRAQ INTERPARLIAMENTARY MEETING
THURSDAY 3rd DECEMBER 2015
THE EUROPEAN PARLIAMENT, BRUSSELS
Mr President, Hon. Members of the European Parliament and Hon. Members of the Iraqi Council of Representatives, Salam Aleikom ! I am very happy to see you here in Brussels. It is a great privilege for me to have been invited to address this meeting today. Indeed it brings back fond memories of the 5 tense years that I chaired this delegation and my frequent visits to Iraq. It is also a particular privilege to pay my respects to my great friend and colleague David Campbell-Bannerman, who now chairs this Delegation. It is reassuring to know it is in such good hands.
During my last year in Parliament I formed a non-profit organisation (NGO) here in Brussels, called the European Iraqi Freedom Association or EIFA. Many Iraqis encouraged me to continue to follow the situation in Iraq and I am trying to do that. The Facebook of EIFA now has more than 46,000 fans or likes. I am really grateful to many people in Iraq who have expressed sympathy and support for our work. I have tried to defend the people of Iraq, whether they are Shiias, Sunnis, Kurds, Christians, or a multitude of other ethnic communities.
I have tried to be quite blunt and outspoken in defending the rights of the Iraqi and Iranian people. I have done this without fear of being on bad terms with the government in power. This is the price we have decided to pay for our principles which is defending democracy and human rights.
I have been under a lot of pressure and even accusations by the two regimes currently in power in Iran and Iraq. Over the years I have become a target of numerous attacks and misinformation campaigns by the mullahs in Tehran and by supporters of Maliki in Baghdad. But the only thing I have gained is the sympathy and support of the people in these two countries who have suffered so much under Islamic fundamentalism. We have tried to be their voice in Europe. And this is enough for me. So today please allow me to express my opinion and the views of the European Iraqi Freedom Association, in the hope that our efforts will contribute to helping the people in Iraq which is the subject of our debate today.
The current war raging across Iraq was as avoidable as it was predictable. This war has displaced hundreds of thousands, leaving Iraq with more than 2 million internally displaced persons.
When I was elected President of this delegation in 2009, I warned that Nouri al-Maliki’s second term as Prime Minister, insisted upon by Iran and supported by the US and the EU, was a tragedy for the Iraqi people, for the region and for the world. As a puppet of the Iranian mullahs, he encouraged the Iranian-led militias and used them to enforce his merciless “iron fist” sectarian policy of indiscriminate bombing, shelling, arbitrary arrests, torture and mass executions of innocent Sunni civilians.
The Shias, Sunnis and Christians had lived together peacefully in Iraq for millennia. But with the Iranian regime’s meddling, the sectarian war started, which is of course one of the main reasons for the rise and growth of extremist groups like Daesh or IS in Iraq. We can say the same thing in Syria, where the mullahs back Bashar al-Assad and where more than 300,000 people have been killed so far, the majority of them civilians.
When Maliki was in power, the number of executions in Iraq rose to record levels and an increasing number of political opponents found themselves faced with trumped-up charges of terrorism.
Many women are held in prison to this day in intolerable conditions. But we in the West stood aside and allowed Maliki to remain in office and now we are witnessing the results of this catastrophic policy. The sudden emergence of Daesh became a convenient focal point enabling Maliki to accelerate his sectarian campaign against his political foes.
Now, I understand that the Iraqi Commission of Integrity (CoI) recently told the Iraqi Parliament that Maliki siphoned off $500bn (£327bn) during his term in office between 2006 and 2014. The report states that nearly half of the Iraqi government’s revenues during that eight-year period were “stolen” by Maliki. This was corruption on an industrial scale. Iraq is now considered as the most corrupt country in the Arab world, according to the latest Transparency International report. I fully appreciate that Haider al-Abadi sacked Maliki as vice-president in August this year as part of his reform package, but I have to ask the question, why has he not been arrested? Why has he not been indicted for crimes against humanity, genocide and venal corruption? On the contrary, Maliki still wields considerable power and still finances a private army. This is a disgrace and an offence against any attempt at reform.
When Maliki came to power, step by step his government got closer to Tehran. A clear indication of this was Maliki’s approach towards the main Iranian Opposition, members of the People’s Mojahedin Organisation of Iran or PMOI/MEK. But from the first day after the fall of Saddam, Tehran had conspired to massacre their arch foe and to annihilate Camp Ashraf and in Nouri al-Maliki they found a willing tool.
As the U.S. withdrew from Iraq, it handed over the protection of Ashraf to Maliki’s government, having first signed an agreement with each and every individual resident of Ashraf, guaranteeing their safety and security in return for the surrender of their weapons.

This amounted to signing the death warrant for these defenceless residents. The predictable outcome materialised in the form of six brutal massacres during the years 2009 to 2013 under Maliki’s direct supervision, culminating in a seventh obscene rocket attack on the unarmed civilian refugees in Camp Liberty near Baghdad Airport on Thursday 29th October, just over a month ago. More than 80 rockets rained down on the sleeping refugees, killing 24 and horribly injuring many others. There was widespread destruction. The rockets were fired from a carefully planned position well within the tight security zone that surrounds the camp and the airport. This attack would not have been possible without the direct collusion and involvement of the Iraqi authorities.
Since 2009 over 140 residents of Ashraf and Liberty have been killed, with hundreds more maimed and severely injured. Since the attack and all the many expressions of concern from political leaders around the world, the Iraqi government has not only continued to suppress the refugees in Camp Liberty, they have actually tightened the screw, by denying access to food trucks, septic tanks, fuel tankers and trucks carrying essential materials needed to repair the hundreds of damaged huts and trailers. 27 refugees have died because of the on-going brutal medical siege on the camp.
The 2,200 residents who survived the massacre are now being subjected to even worse abuse, mistreatment and humiliation than before. There are numerous reports from Camp Liberty that agents of the Iranian regime’s Ministry of Intelligence and Security, pretending to be relatives of the residents, are being brought by the National Security Advisor Faleh Fayyadh (Fa-Yaaz) to the camp to collect intelligence for further terrorist operations. I urge my colleagues in the Iraqi parliament to call for the immediate removal of Faleh Fayyadh because he is a symbol of the corrupt days of Maliki and he has also been indicted by the Spanish courts for: “offences against the international community”.
The sooner he goes the better for the credibility of Iraq.
The main problem in Iraq is the Iranian regime. The Iranian regime is using the war against Daesh to control Iraq. My advice to my brothers and sisters in Iraq is: Do not allow this to happen. Iraq is a great country. It deserves to be an independent country. It should be given a chance, Inshalah! to be free of extremism.
The fight against Daesh is a just and legitimate fight. We have to defeat Daesh in Syria and in Iraq. They are attacking us here in Europe. But we will not tolerate Bashar al-Assad as he is a mass murderer. He is a key cause of the problem. He is also a key cause of the problem of refugees who are running from him and from Daesh. So no cooperation with Assad or with Khamenei or Rouhani. No cooperation with Islamic fundamentalists and their allies.
And we will not close our eyes to human rights violations in Iraq especially by the militias who are linked to Tehran. I have received many reports from different cities in Iraq where people complain that the Shiia militias sponsored by the mullahs in Iran are committing many crimes and are every bit as bad as Daesh.
So we call on Prime Minister Haider al-Abadi to expel the Iranian regime from Iraq and to disband the brutal militias affiliated with Iran. He should quickly reform the corrupted justice system. He must jail Nouri al-Maliki and re-train the Iraqi military and police as a communal force involving all sections of Iraqi society. We have to give hope to the Sunni community and encourage them in the fight against Daesh. The majority of Sunnis are not extremists. They need to be treated humanely and then they themselves will kick out Daesh as they did with Al-Qadeh some years ago.
Mr President, Ladies and Gentlemen, my dear Iraqi brothers and sisters, we were greatly encouraged when Haider al-Abadi became Prime Minister and spoke of the need for reforms.

But we need to see these reforms in action. I am very concerned about the fate of Iraq. Daesh has to be defeated but we have to make sure that the Iranian regime does not exploit this conflict to advance its destructive influence. Iran is not part of the solution, it has been a source of the problem in both Iraq and Syria for years.
Thank you very much.
Struan Stevenson
President European Iraqi Freedom Association (EIFA) & Former Chair of European Parliament’s Delegation for Relations with Iraq (2009-2014)
http://eu-iraq.org/index.php/press-releases/item/721-speech-by-struan-stevenson-european-parliament-iraq-delegation-3-dec-2015 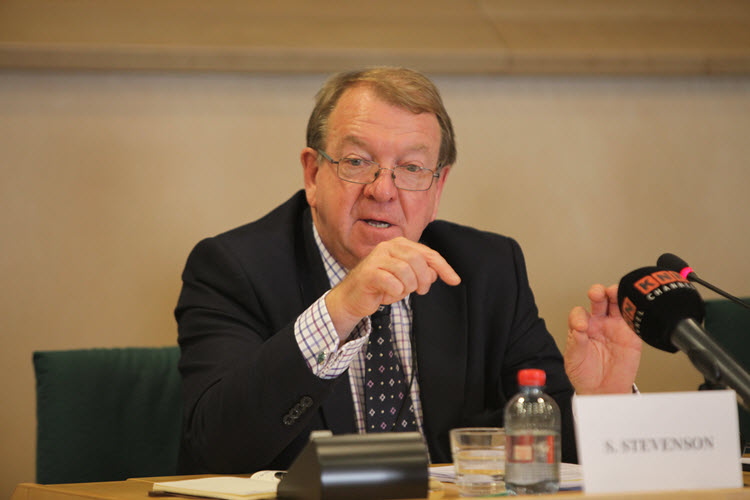 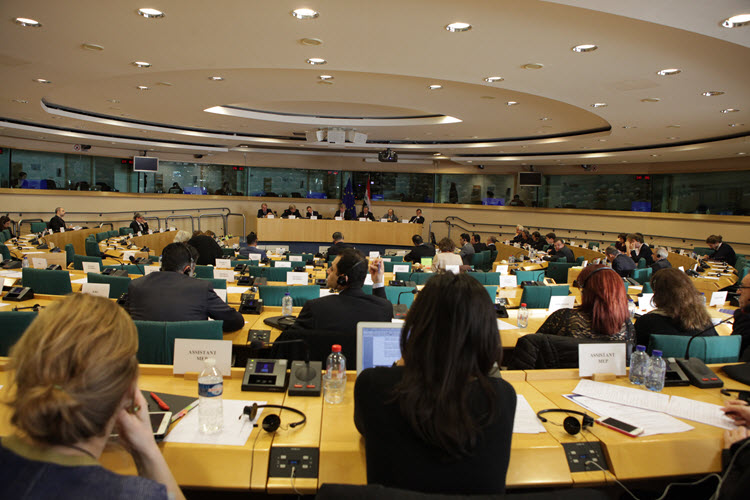 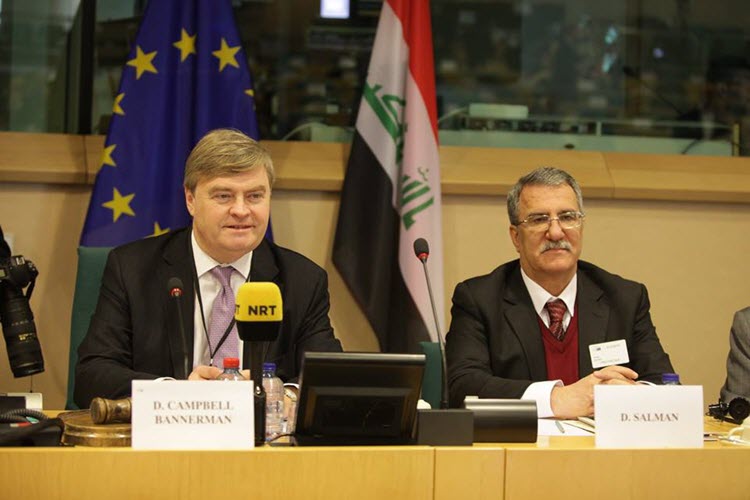 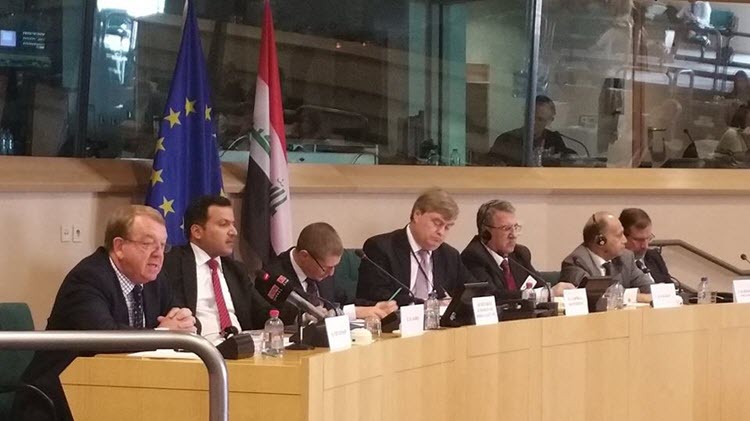 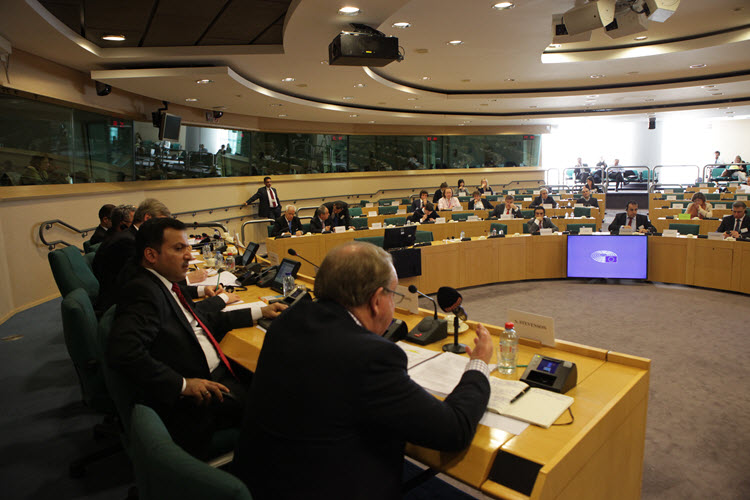 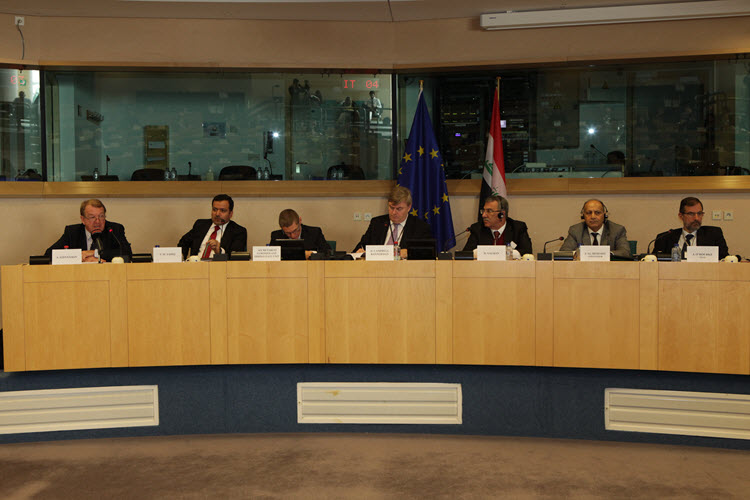