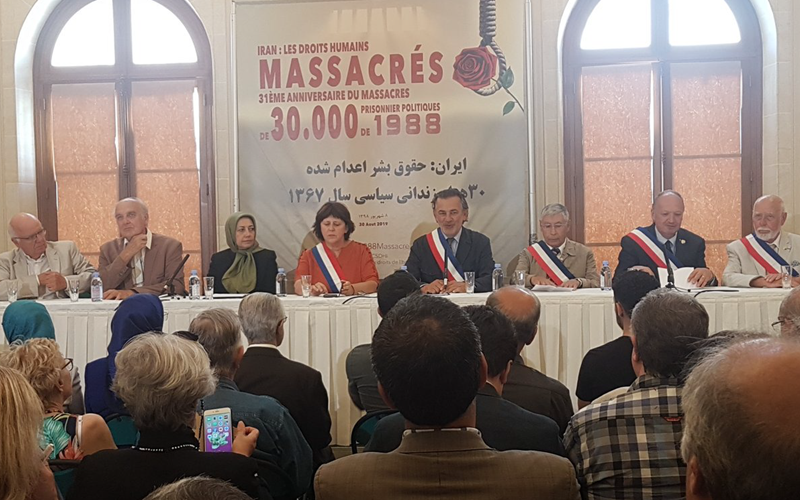 The conference, titled, “Iran: Massacred Human Rights: 31st anniversary of massacre of 30,000 political prisoners in 1988,” brought together French lawmakers, mayors and human rights activists who appealed to the French government and the United Nations to hold Iranian officials accountable for their "ongoing crime against humanity."

Iranian opposition leader Maryam Rajavi sent a message to the conference, saying: "The time has come for the international community to end three decades of impunity for the clerical regime’s leaders in accounting for their crimes."

"The dossier of human rights violations in Iran, particularly the massacre in 1988, must be referred to the UN Security Council," Mrs. Rajavi said.

The Regime's Supreme Leader Ali Khamenei and other regime officials must face justice for committing crimes against humanity, she said.

"The United Nations must launch an international mission to investigate the 1988 massacre in Iran," Mrs. Rajavi added. "And the world must recognize the Iranian people’s right to resist and fight for the overthrow of the ruling religious fascism."

Michèle de Vaucouleurs, a member of France's National Assembly, told the conference: "We are on your side. We will continue to stand together for freedom in Iran."

Ms. de Vaucouleurs, who chairs the French Parliamentary Committee for a Democratic Iran (CPID), later tweeted: "Let's remember that 31 years ago, 30 000 political prisoners were executed by the mullahs' regime. This massacre must not be forgotten and must not remain unpunished."

Jean-François Legaret, Mayor of Paris' District 1, told the conference: "Beyond our solidarity, we must remember the international principles against mass killings, especially that of the 1988 massacre in Iran. There must be no impunity for the mullahs in Iran."

Survivors of the 1988 massacre and victims' relatives gave first-hand accounts of the atrocities committed by the mullahs' regime.

• The vast majority of the victims were activists of the opposition People's Mojahedin (PMOI, Mujahedin-e Khalq or MEK).