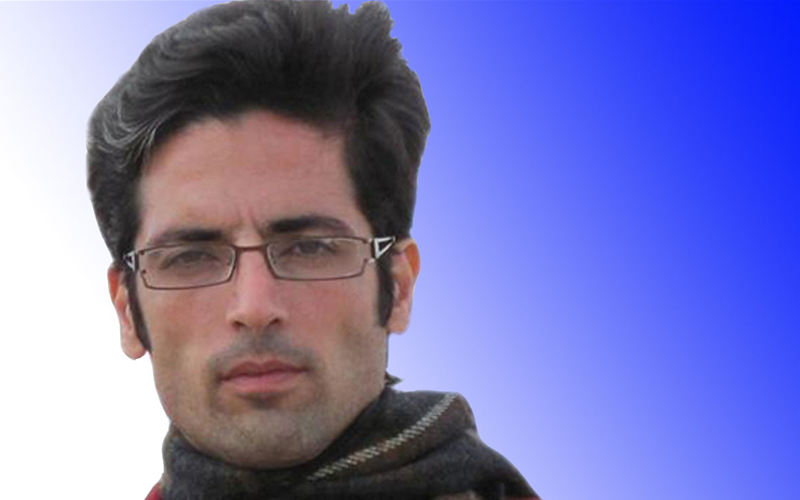 The political prisoner Majid Assadi. Assadi has been denied access to medical care for his severe ailments as a way of torturing him.

Written by Mansoureh Galestan on 13 September 2019.

Assadi suffers from Ankylosing spondylitis (AS), a rheumatism disease that affects the spine, ulcers, inflammation in his vision network, inflammation of his intestines, and digestive problems that have intensified because of the deprivation of medical care.

Assadi, 37, has to visit a hospital outside the prison every three months to control his AS syndrome, which is extremely dangerous, but because of restrictions by the prison authorities and the regime’s judiciary, he’s not been able to access physicians and specialized care.

Assadi has been detained in Rajaee Shahr (Ghorodasht) Prison in Karaj, west of Tehran since February 18, 2017, when he was arrested by Intelligence Ministry agents.

On November 27, he was sentenced to six years in prison and two years in exile in Borazjan, Bushehr Province for “propaganda against the state” and “assembly and collusion against national security”.

Assadi, a translator, was previously sentenced to four years in prison on March 2010 for “assembly and collusion against national security” by Branch 15 of the Revolutionary Court. He was released on June 8, 2015.

The regime ruling #Iran uses illnesses in its attempt to break the will of political prisoners.#HumanRightshttps://t.co/ZgWPu9KwRx

The Iranian regime has a horrific record for treatment of prisoners, especially political prisoners, and routinely denies them necessary medical treatment.

In another example, Iranian authorities’ deliberately denied medical care to blogger and human rights activist Arash Sadeghi, which caused him to lose the motion in his right arm. He has a rare form of bone cancer and needs to undergo several rounds of chemotherapy, but has still not been given permission to receive treatment.

On July 10, the United Nations listed Sadeghi as one of many prisoners in Iran who have repeatedly been denied adequate medical treatment. In a statement, the UN experts said that Sadeghi’s “critical condition” was “particularly alarming”.
This is just one form of torture that is common in Iran’s prisons.

Critically- ill human rights defender and cancer patient #ArashSadeghi should never have been jailed in the first place and now Iran's authorities are violating his right to life by denying him life-saving medical care. @khamenei_ir Release Arash NOW!https://t.co/p7dDL2ummV pic.twitter.com/EIhLiHO8Kp