17 workers flogged for protests after losing work at Iran mine 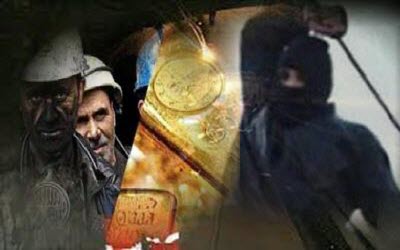 NCRI – Seventeen Iranian miners who took part in a protest after being made redundant were lashed between 30 and 100 times earlier this month as punishment by the mullahs’ regime in Iran.

The men previously worked at the Aq-Dareh Gold Mine in Western Azerbaijan Province, north-west Iran.

In December 2014 the Pouya Zarkan Company which runs the gold mine fired 350 of its workers. As a result a large protest was held by the sacked workers outside the guard’s office near the mine.

The conduct of the guards toward the protesters led to one of the ex-employees, who was under considerable pressure due to losing his job, to commit suicide on December 27, 2014.

The regime’s judiciary in the province quickly moved to prosecute 17 of the former laborers for instigating havoc. They were sentenced to time in prison, a fine and flogging.

Vahid Yari, the state-appointed lawyer for the 17 men, told the state-run ILNA news agency on Wednesday, May 25, that the flogging sentence was carried out in mid-May. He said five of the workers received 100 lashes each, another five received 50 lashes each, and the remaining seven received 30 lashes each for their part in the protests.

Previous articleIranian Sunni prisoners protest insults in Gohardasht Prison
Next articleStruan Stevenson: Scotland should think long and hard before it does business with Iran regime

The amplifying COVID-19 crisis in Iran has now turned into the regime’s worst nightmare. The mullahs’ regime, which sought to use coronavirus and its...
Read more
Iran Human Rights

The People’s Mojahedin Organization of Iran (PMOI-MEK) announced this afternoon, November 23, 2020, that Coronavirus has taken the lives of more than 165,200 in 465 cities across Iran....
Read more