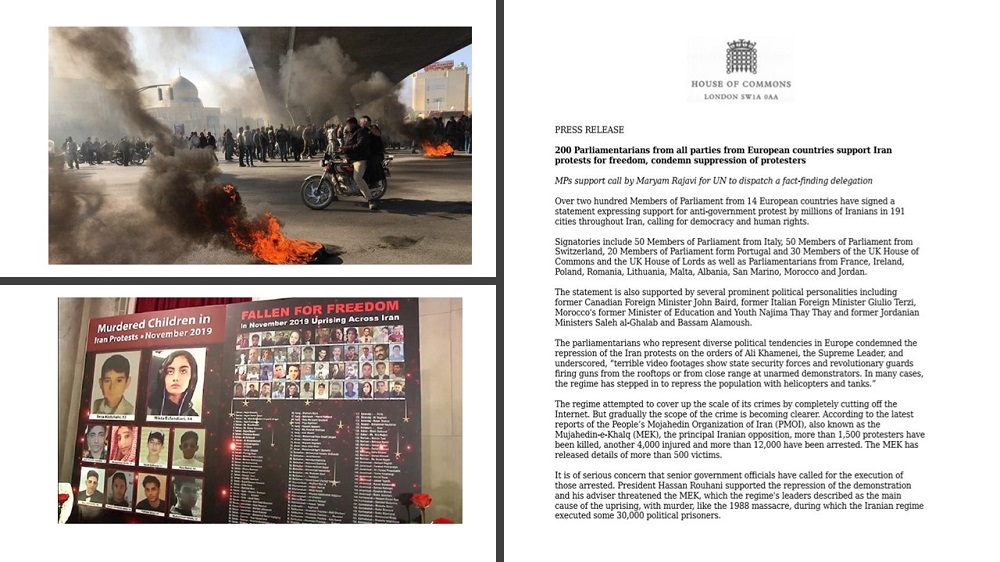 On Friday, December 20, 2019, four British lawmakers announced in a press release: “Over two hundred Members of Parliament from 14 European countries have signed a statement expressing support for anti-government protest by millions of Iranians in 191 cities throughout Iran, calling for democracy and human rights.”

The parliamentarians who represent diverse political tendencies in Europe condemned the repression of the Iran protests on the orders of Ali Khamenei, the Supreme Leader, and underscored, “terrible video footages show state security forces and revolutionary guards firing guns from the rooftops or from close range at unarmed demonstrators. In many cases, the regime has stepped in to repress the population with helicopters and tanks.”

“The regime attempted to cover up the scale of its crimes by completely cutting off the Internet. But gradually the scope of the crime is becoming clearer. According to the latest reports of the People’s Mojahedin Organization of Iran (PMOI), also known as the Mujahedin-e-Khalq (MEK), the principal Iranian opposition, more than 1,500 protesters have been killed, another 4,000 injured and more than 12,000 have been arrested. The MEK has released details of more than 500 victims,” said the press release by Rt Hon David Jones MP, Bob Blackman MP, Lord Clarke of Hampstead CBE and Professor Lord Alton of Liverpool.

“It is of serious concern that senior government officials have called for the execution of those arrested. President Hassan Rouhani supported the repression of the demonstration and his adviser threatened the MEK, which the regime’s leaders described as the main cause of the uprising, with murder, like the 1988 massacre, during which the Iranian regime executed some 30,000 political prisoners.”

“The silence of the international community regarding this crime, one of the worst crimes of the 21st century, is unacceptable. The leaders of the Iranian regime have to be held accountable.”

“The signatories of the statement called on the United Nations, the European Union, and the Member States to condemn the suppression of protesters, to take urgent measures to stop the massacre and release of detainees and to provide the Iranian people with free Internet access.”

“They also endorsed Mrs. Maryam Rajavi, the NCRI’s President’s call to United Nations to send an investigative fact-finding mission to visit the uprising detainees in Iran and call on the Security Council to investigate crimes against humanity in Iran and hold its officials accountable for their crimes and to face justice,” the press release added.

The United Nations Security Council must declare the November massacre, one of the most horrific crimes of the 21st century, as a crime against humanity so that the regime’s leaders are brought to justice #IranProtests #Iran pic.twitter.com/nd010wuVI0

Rt Hon David Jones MP is a Conservative member of the UK House of Commons and co-President of the International Committee of Parliamentarians for a Democratic Iran.

Bob Blackman MP is a Conservative member of the UK House of Commons and a member of the International Committee of Parliamentarians for a Democratic Iran.

The Lord Clarke of Hampstead CBE is a Labour member of the House of Lords.

Professor Lord Alton of Liverpool is an Independent Crossbench Member of the House of Lords. 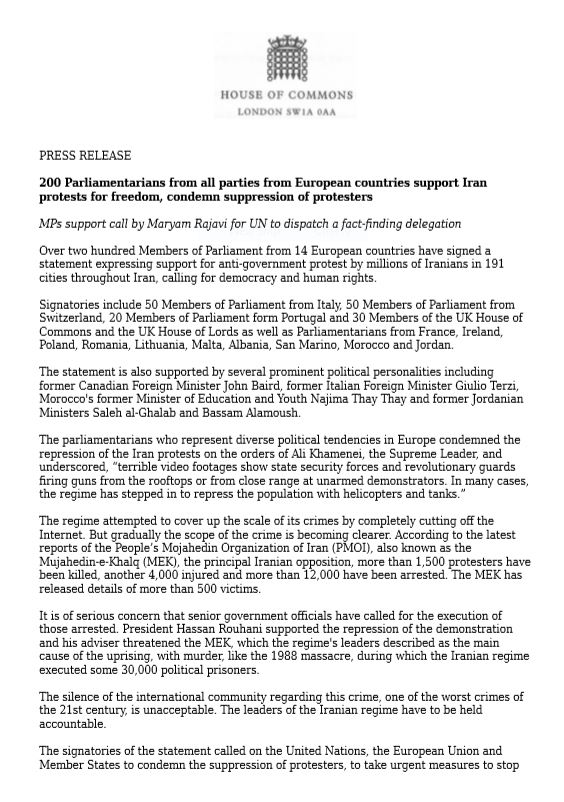 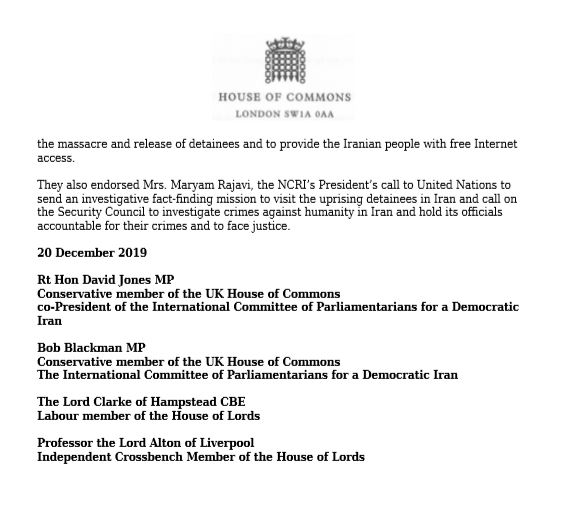 Previous articleLarge Number of Girls, Women Among Those Killed and Arrested
Next articleDay 38 of Iran Protests: 200 Lawmakers From 14 European Countries Support Iran Protests for Freedom

Reports tallied by the People’s Mojahedin Organization of Iran (PMOI/MEK) indicate there have been various protests by all walks of life across Iran within...
Read more
Iran Protests & Demonstrations

In November 2019, Iran was rocked by a popular uprising that spanned at least 191 cities and reiterated previous, powerful demands for regime change. On the...
Read more