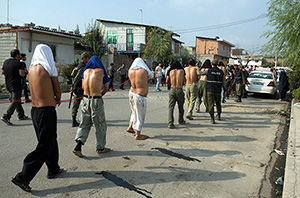 The degrading street-parade took place on Monday. All five victims were chained together and paraded on the back of a Toyota truck from the Lashgar Junction until Monirieh Square.

The suppressive security forces driving the truck repeated honked the horn to draw attention, but passers-by were visibly distraught and angered by this medieval and degrading act.

Authorities frequently parade young men, forced to sit backwards on donkeys, in their local neighborhood so as to embarrass and humiliate them. Previous such barbaric acts of parading youths targeted young men on charges of disregarding nightly curfews or showing disrespect towards security agents. This time women were also a major target.

Also this week two women were hanged in Iran.

In the first case, the mullahs’ regime on Wednesday hanged a 43-year-old mother in a prison in the city of Karaj, in Alborz Province, north-west of Tehran.

Qarchak Prison, also referred to as ‘Qarchak Death Camp’, was used by the Iranian regime as a place to brutally torture and rape those arrested during the 2009 anti-regime popular protests. The death of at least four young protesters under torture in Qarchak turned into a scandal for the Iranian regime.
A second woman was hanged in Iran on Thursday. She was among five prisoners who were hanged in the Shahab Prison in the south-eastern city of Kerman.

The deputy chief of the regime’s Social Security Organization on Thursday acknowledged the mullahs’ misogynist policies in Hassan Rouhani’s government.

Some 50,000 female employees have been fired from work in the past 18 month alone, the state-run news agency ISNA quoted the official as saying, adding that the dismissals took place while the women were on pregnancy leave.

In recent days, women in Iran’s western Kurdistan region have once again come under acid attacks by organized misogynist gangs affiliated to the regime.