30 percent increase in price of water in Iran 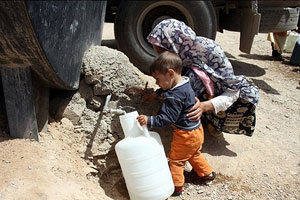 NCRI – Water prices are being increased by up to 30 percent in Iran adding greater burden to the economic troubles of Iranian households.

Alireza Daemi, the Minister of Energy in Hassan Rouhani’s cabinet, announced that there would be an increase of between 10 to 30 percent in water prices. He claimed the 30% increase would affect customers who have higher than average water consumption.

The director-general of Iran’s Water & Sewage Company announced the details of the water price increases by the mullahs’ President Rouhani and his cabinet. The price increase took effect on September 23.

“Based on a decision made by the Economy Council, 52% of customers across the country will experience a 10% increase in water prices,” Hamid-Reza Janbaz said on Monday.

“10,000 Rial subscriptions [the equivalent of 0.33 U.S. dollars], previously cancelled, will be launched once again,” he said.

Previous articleIran: Executions continue on verge of World Day Against the Death Penalty
Next articleEuro-MPs call for end to executions in Iran