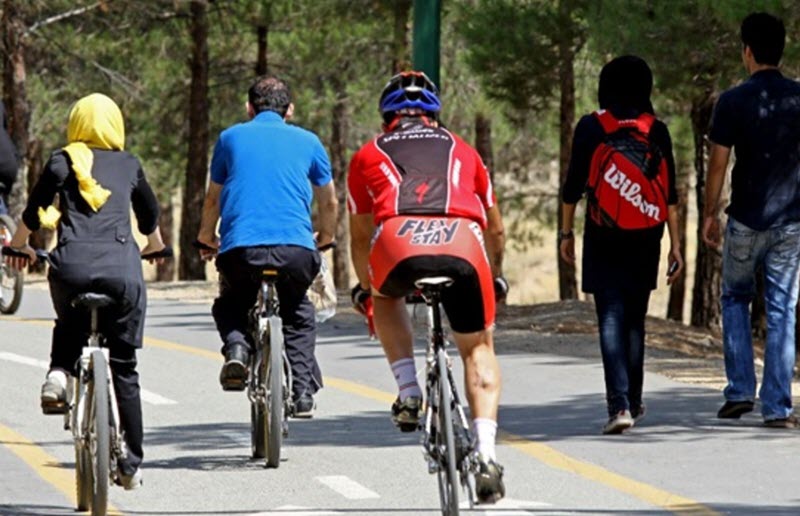 He didn’t say anything about the timing of the arrests, only saying that the women had broken the rules of “chastity and hijab”.

Previously, Massoumeh Ebtekar, a deputy in family and women’s affairs ministry, had earlier said that there were “no rules in Iran which could prevent women from riding bicycles”. Presumably, she meant that women would have to wear the mandatory dress code – a head-to-toe black veil called “chador” –while riding, which would be impossible.

It should be noted that 70% of Iranian women do not believe in the forced veil, which is according to research done last July by the Office of Cultural Studies of the Research Center in the mullahs’ parliament. Given the repressive nature of the regime, it is likely that this figure is less than the real percentage.

Iran’s regime has recently increased its pressure on women in many ways under the pretext of improper veiling. Here are just some examples:

• The Public Places Police have told female clerks in Tehran shopping centres to wear the Maghna’eh instead of a shawl or face the closure of their shops.

• Abol-ghassem Shirazi, head of Tehran’s Union of Clothing Manufacturers and Wholesalers, announced a plan to prevent production and sale of see-through or open-front women’s manteaux.

• The Tehran subway operator has promised stricter hijab control on its trains.

• Tehran Police Chief Hossein Ashtari said that he’d sent 300,000 text messages to women on this matter and that for many weeks, cars were being detained.

• The Airport Police commander said his forces would deal with passengers who adopted a Western style of dress or removed their veils, perhaps even preventing them from boarding their flight.

Those arrested may have to pay a fine, serve jail time, or even be flogged. The regime has even encouraged Iranian citizens to report women for bad hijab through a text service or social media site.

But why, when so many problems are plaguing Iran, are the mullahs focusing on women’s dress? Because their rule is reliant on the suppression of women and the Regime know that women are leading the charge against them. They hope to scare these women, but it won’t work.