75 per cent of educated women jobless in Iran 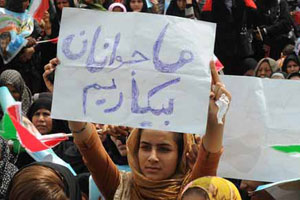 Three out of four educated women in Iran are unemployed and have become housewives, the latest employment figures have revealed.

Only 25 per cent of Iran’s professionally qualified woman remain in work, according to a member of the science delegation at Isfahan University.

Inflation has also had a direct impact on female unemployment and the falling number of women at universities, the Isfahan professor said.

He added: “We can sell oil and build atomic powerhouses, but this is a not a sign of development in the country. Real development is when we develop intellectually.”

Across Iran, only 30 per cent of all women above 15 years of age are in work – compared to 65 per cent in China – and just one per cent higher than 35 years ago.

The number of women in government in Iran is only three per cent, the 11th lowest level in the world, the professor said.