EN FR DE IT AR ES AL
Home News News: Women A Letter From the Iranian- British Citizen Who Is Jailed by the...
NewsNews: Women 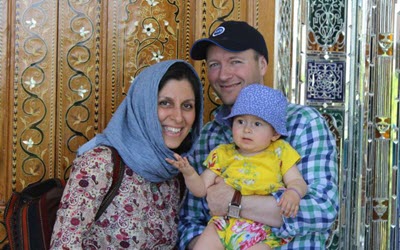 NCRI – The Iranian-British citizen Nazanin Zaghari, who has been arrested by Iranian Revolutionary Guards Corps (IRGC) and sentenced to five years in jail, has in a letter to her daughter complained about being subjected to such a ‘horrifying and painful fate’ in her own birthplace.

Nazanin Zaghari-Ratcliffe, arrested on 3 April 2016 in Tehran’s airport when returning from her two-week trip to Iran, is now in Evin Prison. She has asked her daughter in a letter to forgive her mom for being forced to leave her little daughter alone.

The letter reads: “Believe me, I had no idea such a horrifying and painful fate was awaiting you in the country where your mother was born and raised, otherwise, I would’ve never rushed a single moment to pack for or a two-week trip to Tehran in March 2016.”

Written on Tuesday January 24, the letter has been published on Iran’s Human Rights Defenders Association website on Saturday January 28.

Following her arrest by the Revolutionary Guard’s intelligence agents, Zaghari was taken to a prison in Kerman. She was later transferred to Tehran’s Evin Prison in May 2016 to stand trial in Tehran’s revolutionary court.

Zaghari was sentenced to five years in jail by primary court, following which the Judiciary spokesman Gholamhossein Mohseni-Ejei told reporters that the court order for the Iranian-British citizen was final.

Nazanin’s daughter Gabriella, 22-months old at the time of her mother’s arrest, has been held by Nazanin’s parents ever since.

“The day when they, in all injustice an unfairness, took you away from my arms, my breast from which you were feeding until a few days before, while giving me the hope of a freedom morning, I didn’t know and didn’t understand, either, by which religious, moral or humanitarian standards is such cruelty to a mother and her child valid?”, writes Zaghari in her letter to her daughter.

“Didn’t they hear a mother wailing overnight, those who for their own purposes brought me to trial, reprimanded, charged and kept me in solitary confinements and eventually issued a sentence?”, she asks.

Prior to her arrest, the Iranian-British citizen was the director of a number of projects belonging to Thomson-Reuters Charity Foundation (linked to Thomson-Reuters news agency). She has also been involved in some humanitarian activities in Bam following the earthquake there.

Previous articleEU Warns Iran Against Missile Tests
Next articleThe Spokesman of the Judiciary of Iran: a member of Ahmadinejad’s nuclear team was arrested on espionage charges