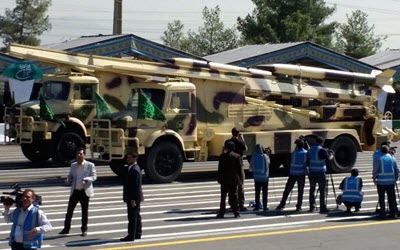 The Iranian regime’s continuing experimentation and development of ballistic missiles – a flagrant violation of Security Council resolution no. 2231 – is proving to be a much more threatening policy than its hibernate nuclear program, writes Saleh Hamid on the website of Al Arabiya English.

“Iran has increased the missile accuracy and production based on the recommendations of the General Commander of the Armed Forces, Supreme Leader Ali Khamenei,” Haji Zadeh said during a speech at the so-called Imam Hussein Military University.

He said Iranian authorities and experts were successful in using “innovative and shortcut methods” to produce these “inexpensive” missiles.

In March, the IRGC fired a missile at a distance of 1,400 kilometers, with a sign engraved in both Hebrew and Persian that read: “Israel should be wiped out of existence.”

The Commander-in-Chief of the IRGC Mohammad Ali Jafari and a number of senior military officials attended the ceremony that saw the firing of the missile.

Saleh Hamid wrote on Wednesday: “The military show of might represented a warning message to all the countries of the region, particularly since Iranian officials are always alluding to possible rocket attacks against other Arab countries.”

“Contrary to the UN resolution no. 2231, which prohibits Tehran conducting ballistic tests and developing long-range missiles capable of carrying nuclear warhead missiles, Iran’s Chief of Staff for the Armed Forces announced in November of last year, that they are establishing new missile factories under the command of the Iranian Revolutionary Guards in Syria.”

“Iran’s military boats also succeeded in completing its live missile launching exercises unexpectedly near US Navy ships in the international waters of the Arabian Gulf, the latest incident was in August.”

“In reaction, the US has set its defense agenda for 2017 by requiring the National Security Advisor to submit a comprehensive report on Iran’s ballistic tests.”

Hamid pointed out that there is a call by US Republican Senator Tom Cotton, urging Congress – in cooperation with the president-elect Donald Trump and in coordination with US allies – to impose new sanctions on Iran’s regime following Tehran’s ballistic missile program, which has become a growing threat to the region.

“These ballistic missiles can reach the territory of the US and its allies. The Iranian regime needs to stop manufacturing missiles and completely stop supporting terrorism and fueling instability in the region,” Cotton said in an interview with US channel Fox News.

Cotton said Iran’s regime “must understand that Trump is different from other ex-presidents.”

Cotton articulated that the Iranian regime’s overproduction of heavy water – necessary material used as a moderator in nuclear reactors – is in opposition with the agreed-upon nuclear deal, and the development of an illegal ballistic missile, along with hostage-taking and hostility towards other countries is due to the weakness of the Obama administration.

Feeling the alarm, the US Department of Commerce last July drafted a resolution to extend sanctions against 15 individuals and institutions for their support of the Iranian regime’s missile program, Hamid wrote.

“In January, the United States had already imposed sanctions on Iran for its violation of the Security Council Resolution No. 2231 when Tehran launched its ‘Imad’ missile, capable of carrying a nuclear warhead on Oct. 11, 2015.”

“Iran’s missile capabilities are being funneled through its other regional allies.”

“The Iran-backed Houthi militias in Yemen had fired Iranian-made missiles on Saudi targets during the past three months. US sources, including the Republican Party senior senator John McCain, have confirmed that the rockets fired by Houthis in November on a US destroyer in the Gulf of Aden were sent by Iran.”

“In November, Hussein Sheikh al-Islam, the advisor to the Iranian foreign affairs minister, said Iranian missiles are not only manufactured in Syria but in other countries in the region as well.”

“Although he did not reveal much about the production Iranian missiles, he said Iraq is one of the countries where ballistic missiles are produced.”