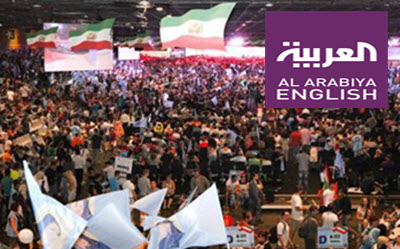 Thousands of Iranian opposition members are expected in Paris this weekend for the annual conference of the National Council of Resistance of Iran (NCRI), Al Arabiya English wrote on its website on Thursday.

Al Arabiya English wrote: “The event, which is aimed at promoting human rights and democracy in Iran, is expected to be attended by tens of thousands of Iranians who say the current regime is not moderate ‘in any way’, despite claims to the contrary, according to the main opposition party’s website.”

“The NCRI believes the situation in Iran is actually worsening, with a deterioration in human rights and the regime becoming more ‘closed and introverted’.”

This weekend’s conference has been widely promoted under the hashtag #FreeIran, and its attendees widely support regime change.

The conference – which forms part of the Free Iran gathering – supports the 10-point plan proposed by Maryam Rajavi, President-elect of the NCRI which called for the introduction of full democracy, equality for men and women, the abolition of the death penalty and the separation of religion and state.

According to the NCRI the number of executions is at its highest in the last 25 years. While it also states that “the Iranian regime is institutionally sowing discord in the region especially in Syria and is continuing to export Islamic fundamentalism”.

It states that Tehran is still testing ballistic missiles, violating UN Security Council Resolution 2231. Meanwhile it states that the country is itself unstable, with no sign of improvement in its economic situation and that “the infighting among the ruling factions have reached unprecedented levels and intensity”.

The NCRI website goes on to criticize the legitimacy of elections under the current regime, following the election of Ahmad Jannati, 90 – “who already headed the Guardian Council and is a staunch loyalist of the regime’s Supreme Leader Ali Khamenei – as the head of the Assembly of Experts”.

They say that “he now heads two key bodies, which shows that elections under this regime are meaningless and the regime’s choices are evermore limited”.

“The big question is what is the direction of the turbulent situation in Iran and where is Iran heading?” the statement adds. “The outcome of these developments and the future of the Iranian regime will have a huge strategic impact on the entire region – a fact that has triggered serious debate in the West.”