Al-Jubeir: Iran Is the Main Sponsor of Global Terror 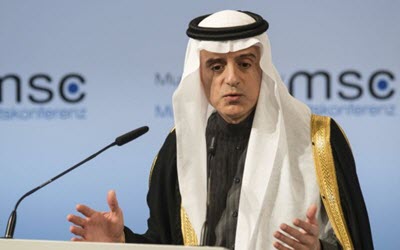 Saudi Arabia’s foreign minister on Sunday 19 February 2017 in Munich, rejected Iranian calls for dialogue saying Tehran was the main sponsor of terrorism in the world, a destabilizing force in the Middle East and wanted to “destroy us.” Reported Reuters.

“Iran remains the single main sponsor of terrorism in the world,” Adel al-Jubeir told delegates at the Munich Security Conference. “It’s determined to upend the order in Middle East … (and) until and unless Iran changes its behavior it would be very difficult to deal with a country like this.”

Al-Jubeir said Iran was propping up the government of Syrian President Bashar al-Assad, funding the Houthi separatists in Yemen and violent groups across the region. He said the international community needed to set clear “red lines” to halt Iran’s actions.

Adel al-Jubeir told delegates at the Munich Security Conference on Sunday that, the new US administration made him optimistic that regional challenges could be resolved.

“We see a president who is pragmatic and practical, a businessman, problem-solver, a man who’s not an ideologue,” Jubeir said of Trump. “He wants America to play a role in the world. Our view is that when America disengages, it creates tremendous danger in the worlds, because it leaves vacuums, and into those vacuums evil forces flow.”

In his talk, one of a series of speeches Sunday under the heading “Old Problems, New Middle East?” Jubeir reminded European colleagues who are nervous about the Trump administration that when Ronald Reagan took office in 1981 there was also a lot of concern in Europe, yet Reagan brought stability to the region and ended the Cold War.

The biggest challenge facing the region is Iran, he said, “Iran remains the single main sponsor of terrorism in the world,” the Saudi minister said. “It’s determined to upend the order in Middle East … [and] until and unless Iran changes its behavior it would be very difficult to deal with a country like this.”

Jubeir said that “Iran is the only one in the Middle East that hasn’t been targeted by Islamic State and al-Qaeda,” implying that there was a relationship between the regime and the terror groups.

The foreign minister also claimed that the Iranians took advantage of the good will of the P5+1 nations negotiating the 2015 nuclear deal. They “stepped up the tempo of their mischief” while the negotiations were taking place, he said, and continue to do so today.

Jubeir said that extending a hand to Iran would not work. “For 35 years, we have offered Iran our friendship and support,” he said, “and got nothing but death and destruction.”

Previous articleIran Regime’s Official: Current Policies Won’t Save the Country From an Economic War
Next articleU.S. Senators Look to New Sanctions Against Iran for Missile Development