All- out Unity Against Iran Regime’s Export of Terrorism 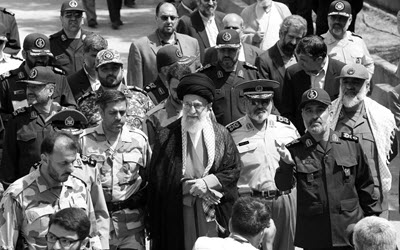 Perfect Timing To Raise The Tone On Iran

After enjoying eight years of active appeasement, engagement and rapprochement from the U.S. under the tenure of President Barack Obama, Iran is beginning to feel the heat, significantly to say the least, in the wake of increasingly harsh remarks made by a slate of American and international correspondents. And with crucial presidential elections looming just around the corner as scheduled for May the 19th, this rise in the tone of the international community couldn’t come at a worst timing for Iran. Wrote Heshmat Alavi, in Forbes on April 1, 2017 and the article continues as follows:

U.S. President Donald Trump made it clear recently of setting aside all obstacles before Bahrain purchasing F-16 warplanes. This initiative was suspended by the Obama administration and this new measure sends a clear signal to Iran, after Trump has described Iran as the main state sponsor of terror.

U.S. Defense Secretary James Mattis in London said Iran is continuing its behavior as an exporter of terrorism and supporting the activities of proxy militias.

U.S. Ambassador to the U.N. Nikki Haley used the opportunity at a meeting in the Council of Foreign Relations to say America must be the voice of individuals such as Neda Agha Sultan, the young woman killed in the streets of Tehran during the 2009 uprisings. This is also a clear U-turn in comparison to the positions adopted by the Obama administration. Haley also described Tehran as a major obstacle in reaching peace in Syria.

CENTCOM chief General Joseph Votel also took a turn on Iran at a significant House Armed Forces Committee hearing to describe the regime as the main element threatening any hope of stability in the Middle East. The world continues to witness Iran’s destructive role in all of Iraq and Syria, he emphasized, adding the international community has failed to witness any improvement following a deal the Obama administration pledged would not only curb Iran’s nuclear program, but also bring about major changes for the good in this regime’s behavior.

To add insult to injury, Saudi Foreign Minister Adel al-Jubeir, representing Iran’s regional archrival, praised improvements in relations between the U.S. and the Saudi kingdom to a historic level never seen before, while also delivering a stark warning to Iran’s devious activities across the region.

And to provide a prelude to the recent Arab League summit in Amman, the kings of Saudi Arabia and Jordan held a meeting condemning Iran’s support for terrorism and meddling in regional countries. Riyadh’s southern neighbor, Yemen, another victim of Iran’s meddling, also witnessed President Abdrabbuh Mansur Hadi condemning Iran’s meddling through supporting the Houthi militias and plunging the entire country into the abyss of a disastrous war.