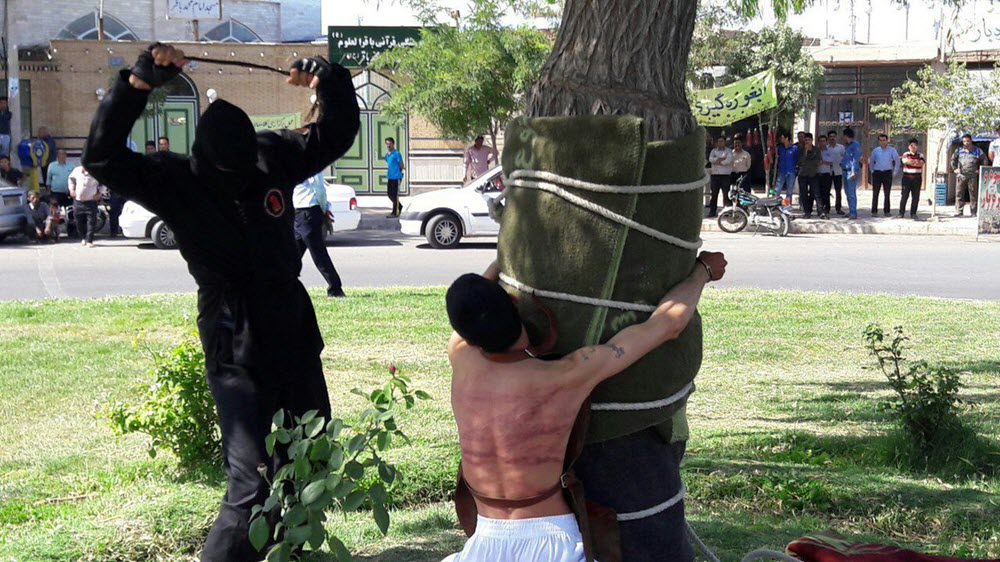 Amnesty International has condemned the Iranian Regime for the “horrific” and “absolutely shocking” flogging of a young man, for the alleged crime consuming alchol at a wedding when he was 14 or 15.

The human rights group issued a statement late on Wednesday, saying that this brutal act of corporal punishment violated international law as well as international conventions on civil and children’s rights.

The man, only identified as M.R., was publically flogged 80 times in Niazmand Square, Kashmar, in Razavi Khorasan Province, on Tuesday, for the crime that he supposedly committed ten years ago when he was a teenager.

Amnesty attached an image to their statement, which showed a young man tied to a tree, being flogged by a masked man, as people watched. They could not independently verify the image, but confirmed that it was from Iranian news coverage of the incident.

Amnesty’s Middle East and North Africa Director Philip Luther said: “The circumstances of this case are absolutely shocking, representing another horrific example of the Iranian authorities’ warped priorities. No one, regardless of age, should be subjected to flogging; that a child was prosecuted for consuming alcohol and sentenced to 80 lashes beggars belief.”

He continued: “The Iranian authorities’ prolific use of corporal punishment, including on children, demonstrates a shocking disregard for basic humanity. They should immediately abolish all forms of such punishment, which in Iran includes amputation and blinding as well as flogging… It’s simply unacceptable that the Iranian authorities continue to allow such punishments and to justify them in the name of protecting religious morals.”

He went on to stress these actions by the Regime are illegal under international law, as Iran has signed up to the International Covenant on Civil and Political Rights, which forbids torture and other cruel, inhumane and degrading treatment or punishment.

Amnesty said that this act highlights the inhumanity of the brutal Iranian justice system. In 2018 alone, the Iranian Regime has carried out various other cruel punishments, including the amputation of a man’s hand for stealing.

There are over 100 “crimes” that are punishable by flogging under Iranian law, including theft, vandalism, defamation, adultery, intimate relationships between unmarried men and women, “breach of public morals”, and same-sex relationships.

Given this horrific abuse of human rights, all countries in the world that are committed to human rights should cut off ties with Iran and make restoration of those ties contingent on an improvement to human rights. The US has already made the right decision in this regard and it is time for the EU to step up to the plate.

Previous articleIran news in brief, July 12, 2018
Next article16% of Female Heads of Household in Iran Are Under 20