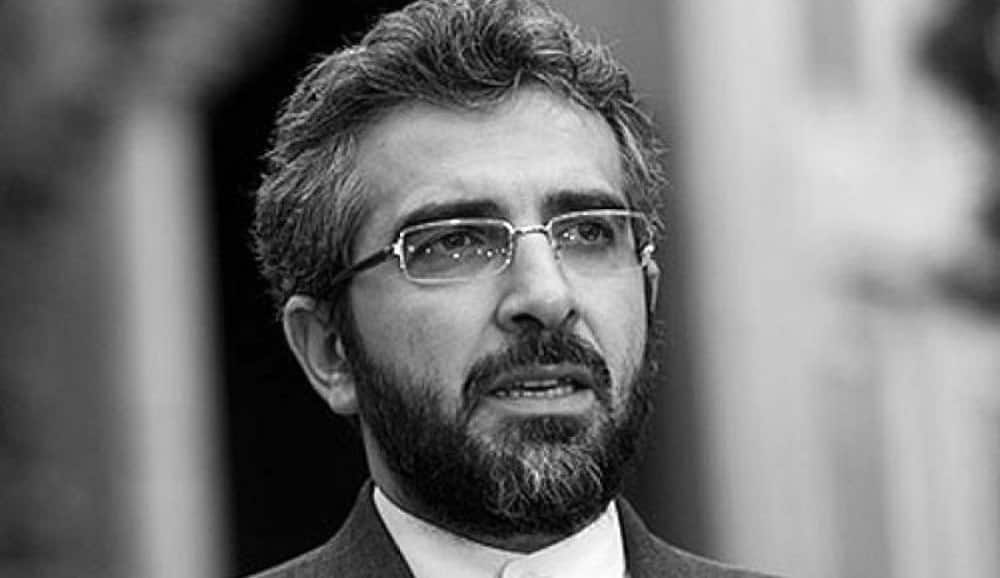 Ali Bagheri Kani has been linked to Iran’s Foreign Ministry for much of his career and has described himself as a “diplomat” since the 1990s. He was a fierce critic of the 2015 Iran nuclear deal or Joint Comprehensive Plan of Action (JCPOA), and as deputy to the foreign minister, he is now in a position to help grow Tehran’s hostility toward the International Atomic Energy Agency. Although the JCPOA is in more serious jeopardy than ever before, it remains the primary focus of Western policy, and so it is worthwhile to learn what impact Bagheri Kani might have on the situation.

Born in October 1967 in the northwestern Kan District of Tehran, Ali Bagheri Kani received a Ph.D. in economics from Imam Sadegh University. The state institution has been an incubator for the careers of some of the Iranian regime’s most trusted officials and has been run by the Bagheri Kani family for four decades. Many nuclear scientists and intelligence agents owe their credentials to this elite academy. Among them are Khamenei’s daughter Hoda and her husband Mesbah ol-Hoda, who happens to be Ali Bagheri Kani’s brother.

Ali Bagheri Kani’s father, Mohammad-Bagher, has been a faculty member of this university since its very foundation and his brother Mohammad-Reza (who changed his last name from Bagheri Kani to Mahdavi Kani), was heading the university until his death. 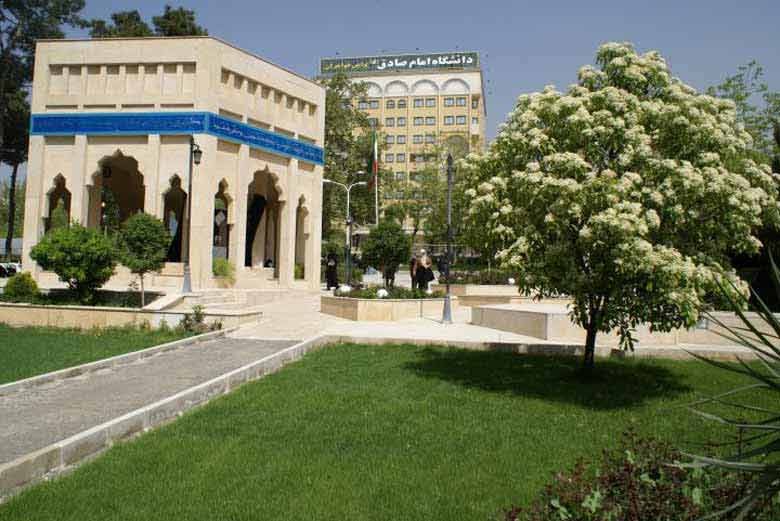 Key positions in the university:

Ali Bagheri Kani’s father, Mohammad-Bagher has also been a member of the regime’s Expediency Council and his uncle Mohammad-Reza has been a cabinet minister, interim prime minister, head of Imam Sadegh University, and head of the Expediency Council. Because of his brother’s marriage to the Supreme Leader’s daughter, Ali Bagheri Kani is literally considered ‘within the family’.

While campaigning for Saeed Jalili, he revealed his mindset when he was discussing international affairs at the end of the interview. He told the host: “When discussing the nuclear dossier, Iran is defending the country’s soft borders and its rights. If we give in, just as they (the former administration) did before, they (the West) will have no limits. In the last rounds of talks, when we were apparently cooperating with them, they eventually asked us to dismantle our entire nuclear fuel cycle… By smart resistance vis-à-vis the enemy, we will solidify our rights, turn threats into opportunities as well as preserve the country’s dignity.”

Ali Bagheri Kani is no stranger to negotiations between Tehran and the West. Under former president Mahmoud Ahmadinejad, he was involved in direct talks with the American delegation while Saeed Jalili was heading the talks with the current CIA director William Burns. In October 2009, for a short period of time, both parties met in Geneva, in the courtyard of a hotel where no reporters were allowed.

In February 2009, while conducting an interview with the state-run Ofogh TV, he explicitly stressed that ‘the aim of negotiations is defending our identity rather than reaching an agreement.’ He clearly explained how the Iranian delegation was dragging its feet and stalling the negotiations to gain technical advancements at the Fordow and Arak sites to gain leverage at the negotiating table. He also claimed that the West was only persuaded to deal with Iran once they learned that Iran had achieved 20% uranium enrichment.

In 2013, while debating on state-run TV Channel 3, Ali Bagheri Kani claimed that Tehran’s persistence had forced the United States to walk back its demands. He said: “Once the Americans would say that they won’t enter the negotiations until Iran suspends (uranium enrichment). But then they were forced to retreat and despite our refusal to suspend, they did enter the negotiations. Also, they argued that they won’t discuss sanctions (relief) if we would not suspend enrichment. Again, they were forced to do it anyway. They had a set of retreats until the Almaty 1 session.”

In May 2020, he explained how the regime used the nuclear talks to extort the West. He told the TV host: “When we started negotiating in 2003, Iran had no leverage, thus we accepted the suspension of uranium enrichment… Some people didn’t believe that the nuclear program is a power component, arguing that we are not seeking nuclear weapons… But sensitive and complex technologies have dual purposes. Only governments invest in such technology because it has a military dimension… We wanted the centrifuges to keep spinning so that the wheels of our economies can spin as well.”

As an introduction of U.S. Deputy Secretary of State Wendy Sherman’s autobiography ‘Not for the Faint of Heart‘, Bagheri Kani wrote: “The outcome of diplomacy with the United States practically denied Iran’s rights and shut down many of our nuclear activities. In addition, the (nuclear) deal stabilized the sanctions’ structure and maintained the economic sanctions. In other words, the outcome of diplomacy with the U.S. was unmitigated damage.”

Human rights in the Judiciary

On December 29, 2017, Ebrahim Raisi replaced Mohammad-Javad Larijani from the Head of the Human Rights Office of the Judiciary after 14 years and replaced him with Ali Bagheri Kani. Mohammad-Javad is a brother to former Parliament Speaker Ali Larijani and to Sadegh Amoli Larijani, the current head of the Expediency Council. Both brothers have increasingly grown at odds with Khamenei’s inner circle.

In September 2018, Sadegh Larijani, the then head of the Judiciary and the chairman of the board of trustees at Imam Sadegh University, took over the presidency from the Bagheri Kani family and appointed Hossein Ali Saadi as the new head of the university for three years. This seems to have been retaliation against Ebrahim Raisi who removed his brother from the Judiciary.

The Judiciary Human Rights HQ, which has been operating since 2005, is supposed to be responsible for “allegations of human rights violations in Iran” as a representative of the regime in international platforms and organizations. For years, Mohammad Javad Larijani was responsible for whitewashing and legitimizing severe human rights abuses in the most barbaric and oppressive regime in modern history. It is a job that Ali Bagheri Kani has proven to be perfectly matched for.

Expressing the regime’s detestation regarding Iran’s main opposition group, the People’s Mojahedin of Iran (PMOI), and responding to the European Parliament’s request to allow in the EU Special Rapporteur for Iran, Bagheri Kani said: “It suffices to walk in the corridors of the European Parliament to see terrorists whose hands are stained with the blood of 17,000 innocent Iranian citizens.” 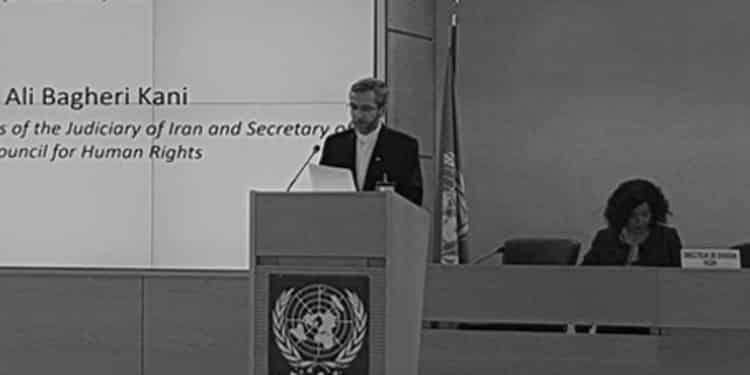 On February 24, 2020, addressing the United Nations General Assembly on behalf of the Iranian regime, Ali Bagheri Kani tried to paint the dictatorship as a victim in order to deflect worldwide condemnations of its human rights record and to push for relief from US sanctions.

In April 2020, when Germany designated Hezbollah as a terrorist group, Ali Bagheri Kani told Iranian state TV: “The new approach by the judiciary means engaging in international affairs. The new approach suggests that any action against Iran should bear expenses.  Countries are not supposed to act against Iran and just walk away without paying the price for it. As we have shown in the military front that any country, even the United States if it wants to take action against us, it has to pay the price. One day, its drone is taken down; the other day, its official military camp in another country gets hit by the Islamic Republic’s missiles. In the legal field and in politics and all other domains, we have to act in a way that they don’t feel there is a comfort zone to use it against the Iranian nation.”

In an interview in 2020, he also revealed his soft spot for the slain Quds Force commander Ghassem Soleimani, claiming: “The countries of the region owe their independence, human rights, and sovereign integrity to Haj Ghassem.”

While speaking on state-run TV in May 2020, he said: “In the West, there is no such thing as amnesty or offering clemency. When being questioned by us, they argued that if there’s amnesty, then the punishment wouldn’t make sense anymore. Westerners do not understand the paternal view we have toward the prisoner. But in Iran, we have two sorts of prisoners; disciplinary prisoners and prisoners who are behind bars for punishment… Those who are in jail to be disciplined can be offered clemency. Our Judiciary’s approach was a unique initiative for many other countries. But other countries have asked why we’re doing this and copied our approach.”

In June 3, 2020, Bagheri Kani discussed the regime’s regional influence on state-run TV by saying: “As the leader has said before, the movement in Syria is actually preserving the national security of our country. Hash al-Shaabi in Iraq, Jeysh al-Shaabi in Syria, Ansarullah in Yemen, Hezbollah in Lebanon, Hamas, and Islamic Jihad in Palestine. These are actually the rings of impacts of the Islamic Republic who have been soared in these geographic units.”

On March 28, 2021, responding to the foreign government’s pledge to hand over their citizens in Iranian jails, Bagheri Kani said: “Although we were willing to exchange some of the citizens of those countries, sometimes prisoners from those countries who happen to be in Iran, are not willing to go from our prisons to the prisons of their own country.”

As soon as Ebrahim Raisi formed a government from the list of the ‘usual suspects’, decision-makers in the West started speculating how it might affect the ongoing nuclear talks in Vienna. As Ali Bagheri Kani’s ideas and actions have consistently matched up with what Ali Khamenei called the ‘revolutionary view’, he is perfectly placed to play a major role in the negotiations with the world powers over the nuclear program. Being on top of the Iranian regime’s national security front for several decades, he perfectly knows how to deceive and deter.

But at the end of the day, it doesn’t matter who speaks on behalf of Tehran or what tone he’s using. Their intentions are already louder than their words. This raises the question: is the international community as determined as they are?