Last week, the Iranian regime sacked Hossein Taeb, the longstanding intelligence chief of the Revolutionary Guards (IRGC) and a confidant of the mullahs’ supreme leader, Ali Khamenei, and his son Mojtaba.

Taeb, a notorious criminal, was removed from his post after 13 years, shortly after several assassinations of the IRGC’s commanders inside Iran and hundreds of operations by the Iranian Resistance aimed at dismantling the regime’s oppressive apparatus, such as the recent takedown of Tehran’s municipality and the city’s CCTVs.

The news of Taeb’s dismissal was a bombshell as it revealed the depth of the regime’s internal crisis. He was considered “untouchable” due to his close relations with Khamenei and his role in oppressing dissidents. But who is Hossein Taeb?

Taeb’s Early Life and his role in the IRGC

Taeb was born in 1963 in Tehran. He joined the IRGC soon after the 1979 revolution. As an IRGC member, Taeb played a key role in the 1980s in hunting, torturing, and killing Iranian dissidents, mainly members and supporters of the People’s Mojahedin Organization of Iran (PMOI/MEK). Taeb climbed the ladder in the IRGC due to his cruelty and was appointed as the intelligence chief of the IRGC’s first brigade, known as “Thar-Allah.”

During the Iran-Iraq war, Taeb was the IRGC’s “Habib Battalion” commander and served with Mojtaba Khamenei. Members of this battalion occupied top posts in the regime when Ali Khamenei became the supreme leader. Some of these figures include Mehdi Taeb, head of Amar HQ, which consists of Khamenei’s most loyal plainclothes mercenaries; Hossein Taeb, former head of the IRGC’s Intelligence; Hassan Mohagheg, a top IRGC commander, and IRGC brigadier general Mohammad Esmail Kothari, director of the “Thar-Allah HQ” in Tehran, which is responsible for oppressing protests in the capital.

In 1988, the regime’s then-supreme leader, Ruhollah Khomeini, had to accept a ceasefire under domestic and international pressure. He managed to save his regime by massacring over 30,000 political prisoners, mostly MEK members. Taeb, among other regime officials, also participated in the mass killings.

The unpatriotic Iran-Iraq war was a profitable business for IRGC commanders such as Taeb. So, when it ended, these thugs, who knew nothing but murder, started dominating Iran’s economic and social affairs.

Ali Akbar Hashemi Rafsanjani, then-president of the regime, appointed Taeb as the head of the “anti-espionage” deputy of the regime’s Ministry of Intelligence and Security (MOIS). Taeb played a key role in the 1990s “chain murders” under Ali Fallahian, then Minister of Intelligence. During that episode, the MOIS agents abducted, tortured, and mutilated dozens of Iranian intellectuals inside and outside the country.

Taeb played a significant role in the targeting of Iranian dissidents abroad, including the assassination of the MEK members Akbar Ghorbani and Zahra Rajabi in Turkey.

Taeb’s expertise was in forming cases against the regime’s opponents and sometimes regime officials. During his years in the MOIS, Taeb churned out many false claims against the MEK. 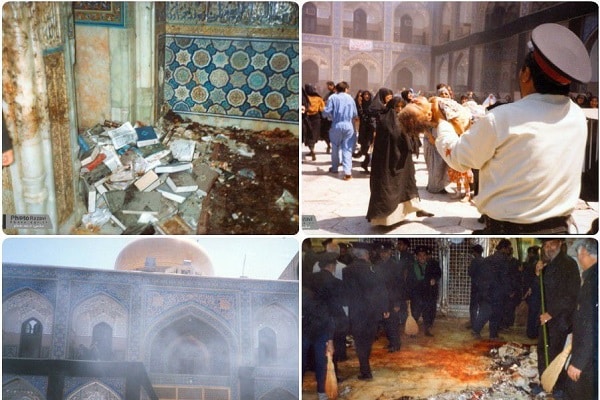 In 1994, hundreds of pilgrims were killed and injured during the bombing of Imam Reza’s shrine in the northeastern city of Mashhad. The regime carried out the bombing but blamed it on the MEK  to demonize the group inside Iran and label it as a terrorist organization, demanding western countries put pressure on them.

To implement the MOIS’s objective, Taeb, working closely with the former Intelligence Ministry deputy Saeed Emami, used a prisoner, Mehdi Nahvi. Nahvi, was tortured into accepting he had participated in the bombing. Nahvi was later apparently released in the Tehranpars district of Tehran but was surrounded and gunned down to wipe out any evidence.

Akbar Ganji, one of the MOIS’s then-top officials, acknowledged how Taeb used Nahvi and presented him as a MEK member and the bombing’s mastermind, while Nahvi had been arrested years before.

Taeb and Emami also planned and ordered the horrific killing of three Iranian priests and later staged a show to blame the MEK for it.

Mehdi Khazali, a former top official, later acknowledged how the MOIS mutilated the priests and framed the MEK members under Taeb’s supervision.

“The MOIS arrested three girls and were forced to frame these three priests for converting Muslims to Christians. When they accepted, the [mercenaries] killed all three priests and mutilated them before the girls’ eyes. They asked these poor ladies to do an interview confessing they killed these priests at the behest of the MEK,” Khazali acknowledged this fact in a conference in 2016, amid the regime’s infightings.

But was goes around comes around, and one case ended Taeb’s career in the MOIS.

Towards the end of the 1990s, Taeb decided to form a case against Rafsanjani’s son, framing him for espionage, to put pressure on his father amid the regime’s increasing infightings. He arrested Abbas Yazdan Panah Yazdi, an Iranian-British businessman who was in contact with Mehdi Rafsanjani. The MOIS agents extracted a forced confession from Yazdi under torture.

The state-run Tasnim News Agency, linked to the IRGC’s Quds Force, published Yazdi’s confession in 2015, two years after he was abducted in Dubai and disappeared.

Taeb’s action infuriated Akbar Hashemi Rafsanjani, who fired Taeb from the MOIS and prevented him from occupying any posts for a short time.

Taeb’s Path to the IRGC Intelligence 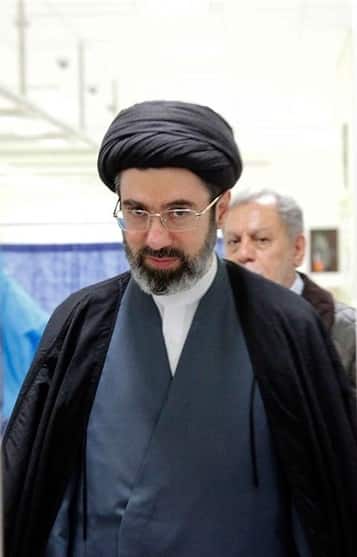 Shortly after his dismissal from the MOIS, Mojtaba Khamenei appointed Taeb as the deputy coordinator of Khamenei’s office or “Beyt.” He later became the cultural deputy of the IRGC and, after three years, served as the president of the IRGC’s Imam Hussain University. Mojtaba and Taeb started forming a “parallel” intelligence service. They laid the foundation of the IRGC’s Intelligence, which later became the most powerful security apparatus in the regime. During his time in Khamenei’s office, Taeb participated in oppressing the students’ movement in the late 1990s, killing and arresting dozens of Iranian university students.

Protests erupted following the regime announced the results of its sham presidential elections in 2009. People poured onto the streets and, in a matter of few hours, chanted slogans against the entire regime. As then-head of Basji’s militia, Taeb organized the regime’s forces and launched a brutal crackdown on protesters. Dozens were killed, injured, or arrested. Among all the victims, the case of Taraneh Mousavi, a young Iranian girl, is heart-wrenching.

Taraneh was arrested by the Basij forces and transferred to the “Thar-Allah HQ” prison, where she was repeatedly raped, tortured, and then killed. According to eye-witnesses, Taeb personally raped and tortured Taraneh Mousavi. Taraneh’s body was burnt to wipe out any evidence.

In response to rising protests against Taraneh Mousavi’s killing, even inside the regime, Taeb also started a false-flag operation. He claimed Mousavi had left Iran and lived in Canada, but later it became evident the family he claimed Taraneh lived with were his relatives.

Taeb and the IRGC Intelligence

In September 2009, Taeb was removed from Basij and became the head of the IRGC intelligence. IRGC Intelligence Organization (IRGC-IO) became notoriously known due to its role in oppressing protesters. Following the assignation of some nuclear scientists and the MOIS’s unsuccessful attempts to save its face, the IRGC-IO became more powerful, sidelining the MOIS and taking its major responsibilities. Some of these responsibilities included providing protection to the regime officials and influential figures and countering the Iranian dissidents, mainly the MEK’s activists.

There are three separate and independent organizations in the IRGC:

All three IRGC organizations operate directly and indirectly under Khamenei and the Revolutionary Guards commander. These organizations are Khamenei’s primary tools of repression and espionage.

The IRGC-IO played a major role in the killings of protesters during the November 2019 uprisings. This terrorist organization has been actively engaged in the regime’s terrorist attacks abroad, including its foiled bombing of the Iranian Resistance’s rally in France in 2018.

While the IRGC-IO claimed it had control over everything, the first major cracks appeared in this organization when Mohsen Fakhrizadeh, the father of the regime’s nuclear-weapons program, was assassinated in broad daylight near Tehran.  Fakhrizadeh’s assassination was followed by several more assassinations of the IRGC top aerospace commanders and nuclear program scientists.  These assassinations, coupled with the sabotage of the regime’s nuclear sites, caused a lot of stir in the mullahs, leading to Taeb’s dismissal.

But the untold story of Taeb’s dismissal is the damages made to the regime’s security apparatus by the MEK and its “Resistance Units.”  IRGC-IO was tasked with hunting down MEK members and preventing their operations. But the rising number of the Resistance Units’ activities, from taking down the regime’s important organizations and ministries and carrying out operations against the IRGC and Basij bases to torching the mullahs’ icons, such as the large statue of Khamenei’s top terrorist Qassem Soleimani, all proved the IRGC-IO incompetence to confront the MEK’s threat.

Taeb’s dismissal, with his close connections to Khamenei and his son Mojtaba, once again shows how fragile the Iranian regime is. The regime in Tehran and its security and military apparatus are a band of brutal thugs who help the ruling theocracy stay in power through oppression and disinformation. Taeb’s dismissal also shows the increasing infightings in the regime and is a testament to Khamenei’s efforts to consolidate power in his regime.

Khamenei has now appointed Mohammad Kazemi as Taeb’s successor and the former commander of the IRGC’s Counterintelligence to “dust-up” the organization. But would Kazemi be successful?