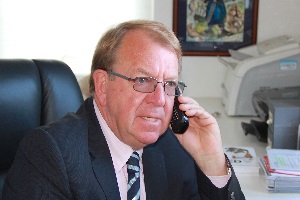 Appeasement of the Iranian regime in nuclear negotiations is a ‘huge mistake which will cost the West dearly’, European Iraqi Freedom Association president Struan Stevenson has warned.

The lifting of sanctions when the deal is signed on June 30 – as demanded by the Iranian regime’s Supreme Leader Ali Khamenei was a ‘great compromise which fundamentally affects our ability to ensure that Iran doesn’t cheat’, Mr Stevenson told a live Q&A on the Iranfreedom.org website.

The deal which also stipulates that all Iranian military instalments – where most nuclear research laboratories were located – are off limits to inspectors will create a serious impediment to ensuring compliance, he said.

And asked whether the nuclear deal would stop the Irand from acquiring the bomb, he stressed that Iran had cheated on international agreements before and will cheat on them again.

He said the world should not be taken in by the ‘good cop, bad cop’ routine employed by the Ayatollah Khamenei and Hassan Rouhani, whose ‘smiling exterior’ has fooled the West.

Mr Stevenson described the deal, just like the recent agreement with Cuba, as Obama’s attempt to ‘leave a footnote in history’, but that his urge to leave a legacy is damaging the stability of the Middle East.

He also stressed the importance of support of the Iranian opposition in Iran, and expressed deep sadness and shock at the west’s ‘betrayal’ of the people in Camp Liberty who were individually guaranteed safety by the United Nations, the European Union and the United States.

The fact that Camp Ashraf is now the headquarters of the Shia militias in Iraq was a ‘cruel irony, Mr Stevenson said, and the only way to end human rights violations in Liberty was for the international community – especially the U.S – to honour its pledge to the 2600 residents.

He refuted the West’s stance over Shia Militia forces in Iraq, saying that while they have helped in pushing back ISIS, they themselves are not any better. The forces are led by Qasim Sulemani, the leader of the Quds Force of the Iranian Revolutionary Guard – a listed terrorist organisation – and under his command they committed atrocities against the Sunni inhabitants to rival ISIS.

He said: “I am amazed that the one-time enemy of Iraq, Qasim Sulemani, roams freely in Iraq, posters celebrating him as an all-conquering hero adorn the walls of Baghdad, while the US provides air support to his military operations.”

The Quds Force had always been used as a tool of advancing geopolitical objectives, and their presence in Iraq is a continuation of that, he said.

Mr Stevenson suggested that the only way to return stability to the Middle East and to counter Iran’s growing regional ambitions is firstly to not sign the nuclear deal, and reinstate sanctions instead – which considering the falling oil prices, Iran’s expenditures in funding foreign forces and the state of its economy, could topple the regime.

And he insisted that the Iraqi leader must drive out the Shia militias from Iraq and establish an effective Iraqi military as the only way to avoid a full blown civil war in that country.