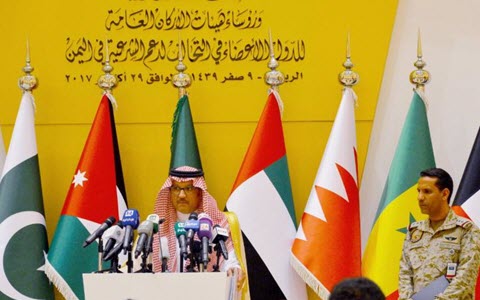 NCRI – A coalition of Arab states has accused the Iranian Regime and its regional proxies of destabilising regional security on Sunday.

The Coalition Supporting the Legitimacy in Yemen denounced Iran’s negative role in the Middle East, noting that the Iranian Regime was supplying coup militias with weapons, ammo, ballistic missiles and landmines in direct violation of the UN Security Council’s Resolution 2216.

The Foreign Ministers and Chiefs of Staff from Arab nations present at the meeting stressed that the Iranian regime and its proxies are responsible for destabilizing Middle East security in an official statement at a press conference.

The coalition’s official spokesperson, Colonel Pilot Turki bin Saleh al-Maliki, announced that the member states condemned the militias for murdering the Yemeni people, exposing them to famine, fear, disease, meddling with the potential of the Yemeni people, and threatening the safety, security, and stability of other countries in the region- mainly Saudi Arabia, the United Arab Emirates and Bahrain.

He also told Asharq Al-Awsat that the Houthis (an Iranian proxy terror group) have targeted Saudi Arabia with 77 missiles. As the Houthis are the first terrorist group that are outlawed in Saudi Arabia and own ballistic powers, they are considered especially threatening.

The coalition also condemned the Iranian Regime for seiging Yemeni cities and looting humanitarian aid which has increased famine and disease in the region.

In the statement, the coalition also confirmed that their military operations- in response to threats by Iranian proxies- are carried out in line with relevant international laws, including the humanitarian ones.

The coalition also addressed the latest report on children in armed conflicts by the UN Secretary-General, António Guterres, in early October. They rejected parts of it for containing what they say is false information and called on the UN to revise it but welcomed much of the report which praised the coalition’s efforts to protect civilians.

The representatives of the coalition forces in Yemen also condemned the Iranian Regime for using, training, and recruiting children into armed conflict. This systematic child abuse by Iran, also addressed recently by the UN, constitutes a war crime and should be treated as such.

The coalition states concluded by stressing the need to- as individual countries and as a team- highlight the crimes carried out by the Iranian Regime and their regional proxies in order to achieve peace in the Middle East.