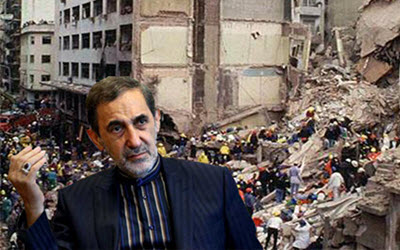 NCRI – According to a report by Fars news agency’s international group affiliated to Iran regime on October 21, an Argentine judge associated with the case on the 1994 Jewish center bombing in Argentina has after being informed of Ali Akbar Velayati’s visit to Iraq asked the Iraqi officials to arrest and extradite the former Iranian Foreign Minister to Argentina.

According to Agence France-Presse (AFP), judge ”Rodolfo Canicoba” who is pursuing the enforcement of the sentences related to the case, has via INTERPOL shared his request with the Iraqi officials after being informed that the former Iranian Foreign Minister and the current Secretary General of the Assembly of Islamic Awakening has travelled to Baghdad to take part in the Assembly’s Council Summit.

In July 18, 1994, an explosion in Argentina’s Jewish Community Center, better known as AMIA, killed 85 people. Argentine’s judicial authorities a have been insisting since then that Iran and Hezbollah are behind the explosion. Several Iranian officials at the time including Ali Akbar Velayati, former Foreign Minister, as well as Akbar Hashemi Rafsanjani, the former President, were placed on the INTERPOL’s wanted list.

Also in July this year following Velayati’s visit to Singapore and Malaysia, the same Argentine judge had asked the officials of the two countries to arrest the Iranian official and extradite him to Buenos Aires.

According to an Argentine court verdict, Ali Akbar Velayati has been placed on the INTERPOL’s red notice list.

The AMIA incident has also turned into a domestic dispute in Argentina. A year ago, Alberto Nisman, the senior investigator in the case, accused Cristina Kirchner, his country’s President at the time, of complicity with Iran to prevent the documents of Iran’s involvement in the AMIA bombing to be released.
Alberto was mysteriously killed in his apartment last year; his murder case is still open.

Previous articleMember of Iran Chamber of Commerce: We are Faced with a $15 Billion Smuggling
Next articleThe delegation of Iran’s Resistance attended the International Conference held in Prague