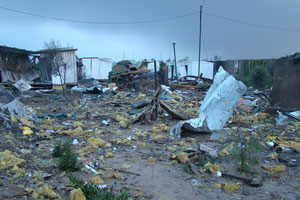 Less than a day after a barrage of at least 80 missiles killed 23 people and injured dozens more at a camp housing Iranian exiles near Baghdad International Airport, the damage was estimated at over $10 million.

The United Nations’ High Commissioner for Refugees, Antonio Guterres, called the attack a “deplorable act.” A team from U.N. went to inspect the damage Friday.

Some of the missiles that struck the camp were reportedly made by Iran. The National Council of Resistance of Iran provided the initial damage estimate.

The rockets hit Camp Liberty, a former U.S. base now housing the group known as the Mujahedeen-e-Khalq, according to a police official. This is the fourth attack on the camp which houses 2,400 members of the opposition since 2013. The missile attack not only killed and maimed residents but caused untold damage. Officials tell Fox News 357 trailers, 10 dining halls and 275 air conditioners were destroyed or rendered totally nonfunctional.

Maryam Rajavi, the president-elect of the Iranian resistance, condemned the attack. “The government of Iraq and the United Nations who signed a Memorandum of Understanding and built a Temporary Transit Location (TTL) since 2011, are formally and legally accountable for this attack. In our view, however, as was the case in the six previous bloodbaths in Ashraf and Liberty, the Iranian regime’s agents in the government of Iraq are responsible for this attack and the United States and the United Nations are well aware of this fact,” she said.

Secretary of State John Kerry released a statement also condemning the attack, and urging the Iraqi government to ensure full medical treatment to the injured. “We also urge the Government of Iraq to provide additional security for the camp’s residents and to find the perpetrators and hold them accountable for the attack, consistent with its obligations under the December 25, 2011 agreement with the United Nations,” he added.

Ed Royce (R-CA), Chairman of the influential House Foreign Affairs Committee, also condemned the attack, saying, “With growing Iranian involvement in Iraq, the security situation around Camp Liberty is increasingly risky. The Iraqi Government made an international commitment to protect the Camp’s residents. The U.S. and international community must demand accountability.”

Whether Secretary Kerry will bring up the attack with Iran’s foreign minister Javad Zarif today at talks in Vienna is not yet known.