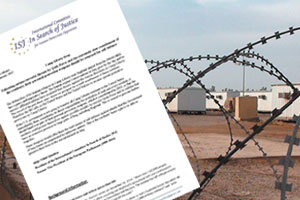 Over 20 people were killed tonight in the most lethal attack so far on Camp Liberty near Baghdad airport where some 2400 defenceless Iranian refugees have been kept in unsafe and inhuman conditions by the Iraqi Government over the past few years.

The attack was conducted with some 80 missiles of different sorts, some of which were Iranian made.

Camp Liberty residents who are members of the main Iranian opposition movement PMOI, have all been interviewed and recognized as asylum seekers by the UNHCR and are protected under international law.

The United States has the main responsibility in protecting the residents of Camp Liberty as it had signed individual agreements with each of the residents and given them written commitment of protection.

The ISJ has repeatedly warned against the Iranian regime’s interference in Iraq and its agenda to physically eliminate its opponents in Liberty.

Since the Iraqi Government has shown to be absolutely unable of protecting these Iranian refugees, it is time the United States lives up to its written commitments and would take immediate measures to prevent further attacks on Camp Liberty.

We call on the EU High Representative Federica Mogherini to also strongly condemn tonight’s attack and accept urgently the residents of Camp Liberty as refugees in the European Union before they are all massacred by Iraqi forces under the control of the Iranian regime and by Iranian agents infiltrated in Iraq.