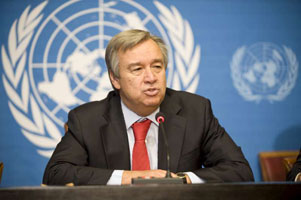 NCRI – The United Nations High Commissioner for Refugees (UNHCR) António Guterres has said he “strongly condemns” the rocket attack on Thursday on 2200 members of the Iranian opposition in Camp Liberty, near Baghdad.

“This is a most deplorable act, and I am greatly concerned at the harm that has been inflicted on those living at Camp Liberty,” said High Commissioner for Refugees António Guterres. “Every effort must continue to be made for the injured and to identify and bring to account those responsible.”

A statement by the UN Refugee Agency on October 29 said: “Camp Liberty is home to around 2,200 people of concern to the Office. The authorities have evacuated the injured to Baghdad hospitals. The full extent of the casualties and damage to the camp is still being ascertained.”