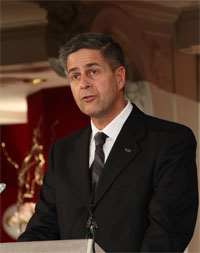 WASHINGTON, April 5, 2012 /PRNewswire-USNewswire/ — In a letter to the Director of Global News for the British Broadcasting Corporation (BBC), a copy of which was provided to the US Committee for Camp Ashraf Residents (USCCAR), two highly-decorated former senior US military commanders in Iraq have expressed their concerns about a highly politically-motivated and questionable report the BBC radio is preparing about residents of Camp Ashraf in Iraq and the People’s Mojahedin of Iran (PMOI/MEK).

In their letter, Brigadier General David Phillips, Commander of the 89th Military Police Brigade (2004 – 2005), and Colonel Wes Martin, Antiterrorism Officer for all Coalition Forces in Iraq (2003 – 2004) and Commander of Camp Ashraf (2006), wrote:

“In recent weeks, the producers of this report at BBC Radio asked for interviews about Camp Ashraf residents and related issues. We initially welcomed the interviews.  However, during the communications and in view of the questions asked, a picture of an unfair process with biased political objective and pre-determined agenda developed.  It is disturbing that the net result of this report will be condemnation of the Iranian opposition, as well as helping to set the world stage for indifference to another massacre such as occurred in 2009 and 2011. A part of this BBC team’s actions that was incomprehensible and unjustifiable for us was the insistence of the producers to rely on selected individuals who identify themselves to be former PMOI members as their witnesses and sources. We know many of these people very well and are fully aware of their relations with the fundamentalist Iranian government.”

Referring to the collection of lies and fabrications leveled against Ashraf residents by these agents of Iran’s Ministry of Intelligence and Security (MOIS), Brig. Gen. Philips and Col. Martin noted that “these people repeatedly told us that they knew individuals at Ashraf who were kept there against their will, or were being harassed and maltreated there; they had even more gripping claims such as the Iraqis were receiving terrorism training at Ashraf. We had full and free access to everywhere at Ashraf and completely investigated each and every one of these accusations. We conducted numerous unannounced inspections/raids at all hours of the day and always ended up with the same result – embarrassment for having responded to false allegations.”

The letter later provides an eye-opening background on several of these individuals, including Batul Soltani and Mohammad Razaggai, who according the U.S. officers, had been recruited by and were working for the Iranian intelligence service.

“Both of us have extensive experience in Iraq, dealing with Iran, and working at Camp Ashraf.  Prior to, during, and after our personal experiences with the former NLA, we had heard all the alleged accusations of what was going on in Camp Ashraf.  Time and again, we found these allegations to be nothing more than rumors,” emphasized Brig. Gen. Phillips and Col. Martin.