Iran: At Least 12 Are Reported Killed in Militant Attacks in Tehran 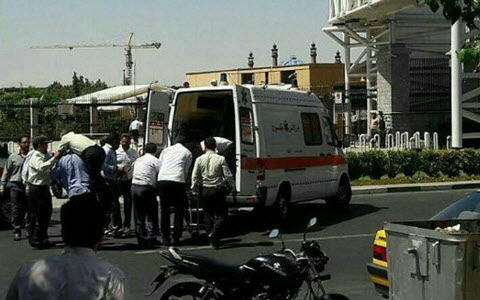 NCRI – Suicide bombers and gunmen attacked the Iranian regime’s parliament and the mausoleum of Ruhollah Khomeini in Tehran on Wednesday morning, killing at least 12 people in a twin assault in Tehran, state media and news agencies reported.

“Islamic State claimed responsibility and released a video purporting to show gunmen inside the parliament building and one body, apparently dead, on the floor.” said Reuters in a report from inside Iran.

Attackers dressed as women burst through the parliament’s main entrance in central Tehran, the deputy interior minister Mohammad Hossein Zolfaghari said, according to the Tasnim news agency, affiliated to the Revolutionary Guards (IRGC).

Initial reports said a suicide vest was detonated in the parliament, and about five hours after the first reports, Iranian state media said four people who had attacked the parliament were dead and the incident was over.

Soon after the assault on the parliament, another bomber detonated a suicide vest near Khomeini’s mausoleum, a few kilometers south of the city, according to Tasnim.

A second attacker was shot dead, the report said.

At least 12 people were killed by the attackers, the head of the Iranian regime’s emergency department was quoted as saying by the state broadcaster IRIB.

Previous articleSyrian Opposition Chief Negotiator Speaking at Iran Opposition Gathering
Next articleISIS Attack on Its Godfather in Tehran at Khomeini’s Tomb and Mullahs’ Parliament Cause for Khamenei’s Joy at Escape From Impasse, Regional and International Isolation