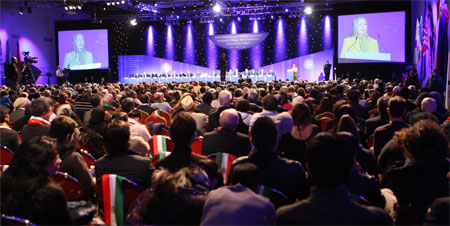 Thousands of Iranian exiles have led a Paris rally to demand the ouster of the Islamic regime that emerged from Iran’s revolution.

Maryam Rajavi _ the Paris-based leader of the People’s Mujahedeen Organization of Iran _ denounced the “evil force” of late Ayatollah Ruhollah Khomeini on the 33rd anniversary of the revolution in which he took power.

Also Saturday, Rajavi expressed sympathy for Syrians under siege by Syria’s Iranian-backed regime and called for better protections for PMOI members at Camp Ashraf in Iraq.

The group wants to be removed from a U.S. list of terror organizations. It has won support from some ex-U.S. officials like former New Mexico Gov. Bill Richardson and ex-Michigan Sen. Spencer Abraham, who were on hand.

Previous articleMrs. Rajavi welcomes the UN proposal for dialogue with the Government of Iraq in order to provide minimum guarantees
Next articleOnly a regime change will prevent Iranian nuclear bomb, says opposition