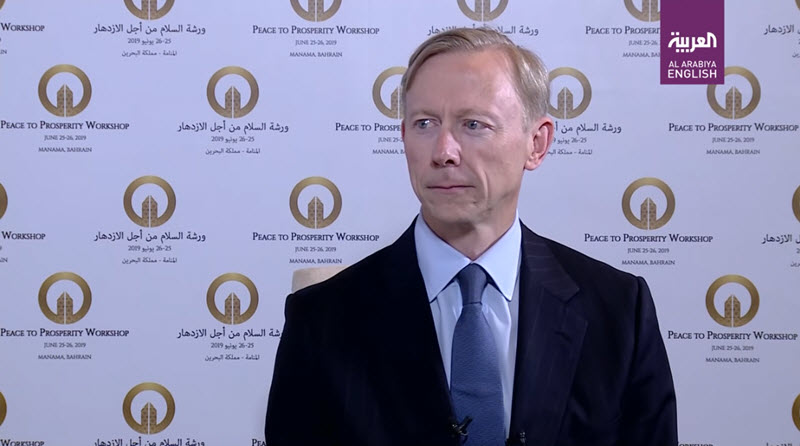 The United States special representative for Iran, Brian Hook, told Al Arabiya that oil sanctions imposed on the Iranian regime alone will deny the regime 50 billion dollars in revenue annually, adding that the pressure is going to continue.

“The oil sanctions alone are going to deny the Iranian regime 50 billion dollars in revenue annually. We’ve also sanctioned the petrol chemical sector, their industrial metals, their precious metals,” Hook said, adding that “pressure is going to continue. This is not sustainable for the Iranian regime.”

It’s important to respond to the Iranian regime’s threats to freedom of navigation, said Hook, suggesting the imposition of more sanctions on the regime and driving up its cost for “behaving like an outlaw government.”

U.S. President Donald Trump is “very comfortable with our pressure and he knows that the Iranian regime is under a lot of strain and they are increasingly vulnerable,” according to Hook.

Ultimately, the special representative said, the U.S. would like to get to a new and better deal than the 2015 nuclear deal signed between Tehran and major world powers, but in the meantime, the administration is “very happy” in denying the regime “billions, tens of billions of dollars” in revenue.

“We think a final deal needs to address the entire range of threats that Iran presents to peace and security. Not only in the Middle East but in most continents of the world where they’ve conducted terrorist attacks either directly or through Hezbollah,” he said.

Earlier on Tuesday, the Trump administration placed three Hezbollah figures, two of whom are members of Lebanon’s parliament, on the US sanctions lists.