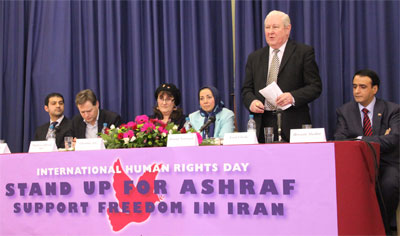 NCRI – A number of British members of Parliament and political figures have strongly denounced an unjust siege laid by the Iraqi government against the residents of Camp Ashraf near Baghdad, where 3,400 members of the main Iranian opposition reside.

Camp Ashraf has been under siege for the past two years. For the last 11 months, agents of the Iranian regime have used more than 140 loudspeakers installed around the camp to psychologically torture the residents, members of the principal opposition People’s Mojahedin Organization of Iran (PMOI/MEK).

At a session on  December 21, 2010 in London, speakers, including two members of the British Parliament, expressed strong support for the beleaguered residents in Ashraf and condemned the unjust restrictions imposed against them at the behest of the Iranian regime.

Among the speakers were a former leader of the British Labour Party, Lord Clarke, a member of the House of Commons, Matthew Offord, a writer and women’s rights activist, Christine Aziz, the UK representative of the National Council of Resistance of Iran (NCRI), Dowlat Norouzi, a member of the NCRI Foreign Affairs Committee, Hossein Abedini, and Chairman of the Committee of Anglo-Iranian Lawyers, Masoud Zabeti.

British MP Matthew Offord underscored in his remarks at the session the importance of fundamental rights and freedoms for democratic countries. He added that Ashraf has become a symbol for the pursuit of freedom, which the Iranian people have been deprived of.

He thanked all those who drew attention to the Iraqi government’s abuses against Ashraf residents and urged the United States to respect its obligations towards the protection of the camp. Mr. Offord also voiced satisfaction over a November 25 European Parliament resolution calling for Ashraf’s protection.

Lord Clarke, a prominent member of the House of Lords, also stressed the need to support Camp Ashraf, and added that their legal status as protected persons under the Fourth Geneva Convention should be recognized. “We call on the US and the UK to respect their obligations towards the residents of Ashraf,” he said.

Christine Aziz, a writer and women’s rights activist, recalled her visit to Camp Ashraf and said if the Iranian regime is described as part of the axis of evil, Ashraf should be seen as an axis of hope. Ashraf is a society which we should strive to model after and its protection responsibility lies with all of us, she said.

Ms. Norouzi, the NCRI representative in the UK, referred to the perseverance of Ashraf residents in the midst of a barrage of plots by the Iranian regime and its proxies in Iraq and said, “The Iranian regime does not only suppress the Iranian people but it also poses a threat to regional and global peace. Ashraf is a formidable barrier against the regime’s export of fundamentalism and terrorism to Iraq and the region.”

Mr. Abedini, a member of the NCRI Foreign Affairs Committee, called for United Nations intervention in Ashraf to stop the residents’ psychological torture by Iranian regime agents who are using 140 powerful loudspeakers posted around Ashraf.

Mr. Zabeti, the Chairman of the Committee of Anglo-Iranian Lawyers, also recalled his trip to Ashraf and said, “When you set foot in Ashraf, you will begin to realize why it is a frightening place for the Iranian regime. Ashraf is a model for tomorrow’s democratic society which will be built in an Iran liberated from the mullahs’ tyranny.”