Burial in Iran of two Afghans sent to fight in Syria 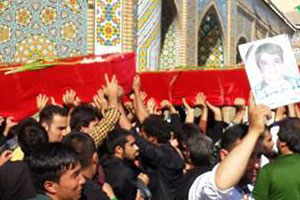 NCRI – Two Afghans sent by the Iranian regime to fight the Syrian people on behalf of Bashar al-Assad have been killed.

Refugees Ahmad Hosseini and Hossein Mahmoudi were buried in the Iranian city of Qum, in an official funeral service held presided over by high ranking cleric Mohammad Sadegh Haeri-Shirazi.

The two dead belonged to the Fatemioun Brigade, a para-military group composed of Afghan refugees sent by the clerical regime, the state-run Abna.ir news agency reported.

Dozens of members of the Fatemioun Brigade sent to fight in Syria have been buried in Iranian cities of Qum, Mashahd, Isfahan and Tehran, Abna.ir said.

Meanwhile, in a rare admission by a senior commander of the Revolutionary Guards Corps (IRGC) on the Iranian regime’s military intervention in Syria, Major General Hossein Hamedani said on May 4: “Today, 130,000 trained Basij forces are waiting to enter Syria. Today we fight in Syria for interests such as the Islamic Revolution. Our defense in Syria is part of the Sacred Defense (term used by the regime officials to refer to the Iran-Iraq war of 1980’s).”

He said of the role of the Basij force in Syria: “This force has been formed in 14 Syrian provinces and in the occupied provinces, these forces have been organized in cells, and they have conducted operations against the armed forces (opposition).”

The bodies of at least four members of the IRGC fighting in Syria for Bashar Assad were also buried on April 29 and 30.

The reports of IRGC members killed in Syria are occasionally posted on state-run websites. All these reports stated that those killed were ‘Defenders of the Zaynab Shrine’ (a sacred Shiite shrine in the Damascus suburbs), a pretext used by the Iranian regime to justify the dispatch of its forces to Syria.