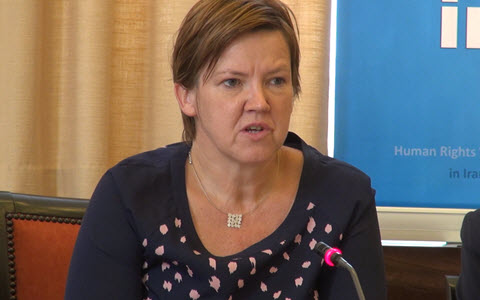 Several members of parliament and senators from different political parties spoke in this meeting which was chaired by Ms Els Van Hoof, member of the Foreign Affairs Committee of Belgian Parliament from the Christian Democratic Party.

The following is excerpts of the speech, delivered by Ms Els Van Hoof, Member of Foreign Affairs Committee in the Belgian Parliament (chair of the conference).

The issue of death penalty in Iran is very concerning for us. Iran today is the number one state executioner in the world per capita.

Iran’s President Hassan Rouhani has publicly defended the executions. During his presidency several thousand people were hanged in Iran. He has also praised the Islamic Revolutionary Guards or the IRGC which is the main tool of repression inside Iran. IRGC has now been put in the black list of the US government for terrorism.

The second point that I want to make is that in Rouhani’s new cabinet there are no women ministers.

Women are the most repressed in Iran. Thousands of female political prisoners have been executed by this regime only for refusing to accept the despotic rule of the mullahs. Many women suffer today in Iranian jails for speaking out for their rights.

I can mention the name of Maryam Akbari Monfared who has lost several of her brothers and sisters during the mass executions in Iran in the 1980s. She has a teenage daughter who has not had the opportunity to be with her mother for the past 8 or 9 years. Maryam Akbari made a formal letter of complaint from inside prison about the 1988 massacre and the execution of her family members. After that letter, she has been put under more pressure by the authorities.

We are also aware about the campaign to seek justice for the 1988 massacre of 30,000 political prisoners in Iran, mostly from the main opposition PMOI. This international campaign began by the opposition leader, Maryam Rajavi, and has now spread to all over Iran. I was happy to meet Mrs Rajavi several times and also last December in Brussels and I believe as a Muslim woman, her leadership ad her political platform for a free Iran is very important.

On the other hand I wish to express my deep disappointment of the attitude of the EU and especially Federica Mogherini. She ignores repression against women in Iran and even went to Iran to take part in the ceremony for the second term of Rouhani. Such a policy of closing the eyes to human rights violations and the repression of women in Iran cannot be justified because Europeans want to do business with Iran.

So to conclude I should emphasize that we as Belgian politicians should remind our government to put human rights first and that this regime in Tehran is not a democratically elected government. So at least we should insist that any expansion of relationship with this regime must be conditioned to a suspension of executions and a clear progress on human rights and situation of women.
Thank you