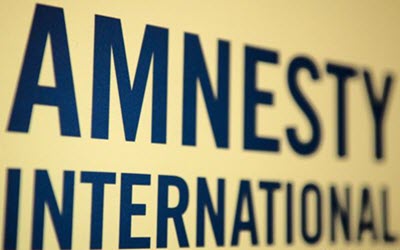 NCRI – On Saturday, December 3, Amnesty International condemned the raid by Security Forces and Police on commemoration ceremony of the victims of serial killings in Iran and demanded immediate and unconditional release of those arrested.

In its statement, the international human rights organization called for a fast and independent investigation on the attack on this ceremony.

Amnesty International, citing eyewitness reports, condemned the repressive treatment of the participants in the event by security forces and demanded the release of four detained people.

On November 3, the Iranian regime’s intelligence agents stormed the memorial ceremony of Mohammad Mokhtari and Mohammad Jafar Pouyandeh, two victims of the serial killing in Imamzadeh Taher in Karaj, and arrested those present in the ceremony after beating and insulting them.

According to witnesses, the agents prevented entry of the participants to the graveyard (where ceremony was held) and attacked and arrested a number of them.

Mohammad Mokhtari and Mohammad Jafar Pouyandeh had been murdered by the agents of notorious Intelligence Ministry during the serial killings in Iran.

The following is full text of the Call:

Iran: Detainees arrested at commemoration for murdered writers must be released

Zarafshan – are being held in an undisclosed detention centre following their violent arrest yesterday.

They were among a crowd of some 100 people seeking to gather peacefully in Emamzadeh Taher Cemetery in Karaj, near Tehran, yesterday to commemorate the killings of prominent intellectuals and writers Mohammad Mokhtari and Mohammad Ja’far Pouyandeh by Ministry of Intelligence officials in 1998. The killings have never been independently investigated. The authorities reacted by deploying police vehicles and dozens of uniformed and plain-clothes law-enforcement officers to disperse the crowd and prevent them from entering the cemetery.

Eyewitnesses said they saw seven or eight intelligence officers beating Mazdak Zarafshan until his face was covered in blood. They also described how the officials shoved his elderly father, Naser Zarafshan, a prominent lawyer and human rights defender, to the ground and beat him on his legs and chest when he attempted to intervene to persuade the intelligence forces to stop. The officials then bundled the father and son into a car and took them away. Naser Zarafshan was separated from his son and released several hours later. Mazdak Zarafshan, however, remains in custody and the authorities have not provided his family with any information about his legal status or whereabouts.

Eyewitnesses told Amnesty International that individuals who held mobile phones in their hands were particularly targeted by plain-clothes intelligence officers, in an apparent effort to stop them filming or photographing incidents of police brutality. It appears that Fatemeh Sarhadizadeh, a 75-year-old woman, was arrested after several officials saw her taking out her phone to answer a call and snatched the phone from her hand while hitting her. Two other individuals present, Baktash Abtin and Mohammad Mehdipour, were arrested at around the same time. Like in the case of Mazdak Zarafshan, the authorities have not released any information about the legal status or whereabouts of these three individuals.

Amnesty International is calling on the Iranian authorities to ensure that prompt, independent investigations are conducted into the violent events of yesterday at Karaj’s Emamzadeh Taher Cemetery and that police and intelligence officials suspected of using unnecessary or excessive force are held to account.

Amnesty International is also urging the authorities to release Baktash Abtin, Fatemeh Sarhadizadeh, Mohammad Mehdipour and Mazdak Zarafshan immediately and unconditionally as, according to the organization’s information, they have been detained merely for peacefully exercising their right to peaceful assembly. The organization appeals to the authorities to shift its approach radically so that it focuses on remedying past crimes, such as the murders of writers and opposition figures in 1998, by ensuring that all those involved are brought to justice in fair trials rather than violating the rights of those seeking to pay homage to the memory of the victims.

In 1999, about 23 employees of the Ministry of Intelligence in Iran were arrested in connection with the deaths of prominent intellectuals and writers Mohamamd Mokhtari and Mohammad Ja’far Pouyandeh and prominent opposition figures Dariyush Foruhar and Parvaneh Foruhar. These deaths were part of a series of extrajudicial killings that targeted intellectuals, writers, artists and dissidents between 1988 and 1998 and came to be known in Iran as the “Chain of Murders”. The arrests took place following an announcement by the Ministry of Intelligence that some of its officials were involved in the killings and the establishment of a special committee to investigate them.

Several of the officials arrested were subsequently prosecuted and sentenced to penalties ranging from imprisonment to the death penalty. However, the circumstances surrounding the killings, including the chain of command along which orders passed, remain shrouded in secrecy and high-ranking officials who were identified by the employees as responsible for ordering and planning the crimes were never brought to justice.