Catastrophe of Housing and Its Consequences in Iran 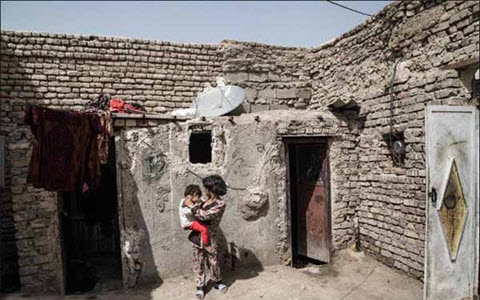 NCRI – The Minister of Roads and Urban Development, Abbas Akhoundi delivered a speech in the city of Mashhad, Northeastern Iran, stating that,” One-third of the urban population of Khorasan Razavi (northeastern Iran) do not have favorable life conditions.30% of the cities in this province have worn-out textures that signify the urban decay, which can be a problem for the future.”

He further admitted that 19 million people do not have a proper housing in the country and they are in critical conditions (Fars News, September 8).Additionally, the regime’s Minister of Roads and Urban Development had earlier admitted to this fact as well. According to Tasnim News, he claimed that there are 9 million worn-out urban textures in the country (Tasnim News, August 28).

Bad housing refers to the residential homes, single rooms, or houses that do not have entrances, toilets, and utilities. Bad housing is also related to the unofficial residences spreading in the city. Nevertheless, the bad housing in rural areas refers to the weakness of constructions, materials, as well as the number of rooms.

According to the Secretary of Comprehensive Housing Plan and based on the minimum standards, each person must have at least 12 meters of residence in a residential unit. In addition, the building must be safe in terms of strength and materials used for its construction and there are minima like a bathroom, toilet, and kitchen in each unit.

According to the government officials, more than 7 million families i.e. 33% are struggling with poverty in the country. In other words, they are not able to afford housing expenses. The Deputy of Housing Foundation, Javad Haghshenas also stated,” The figures show that 2 million and 570 thousand families of the first and second deciles are the tenants below the poverty line and they even cannot pay the rents (Iran Newspaper, August 22, 2017).”

Obviously, people who have bad housing conditions or do not have housing have an income below the poverty line. These people reside in slams, hovels, and favelas. The people residing in these places are those who do not enjoy any social rights in the corrupt government of the clerical regime. Their lives are so poor and their children have to scavenge in the hope of finding a rotten food. The children of work mostly live in these poor areas.

The houses are mostly shacks and sheds in rural areas. The out-worn constructions are so widespread that more than half of the rural population lives in the unsustainable environment. The ramshackle rural houses are in a condition that a moderate earthquake also causes casualties and financial harms.

In this regard, the state-run Jahan-E-Eghtesad (the World of Economy) News reported on April 8, 2017,”Most rural residential units are in a poor condition due to their age, construction, weakness, lack of adequate technical knowledge and execution, the availability of materials, and the low durability of materials.

The brick and stone houses in the villages lack proper size and resistance. They collapse with a slight quake and statistically, the lack of resilience of rural houses has been the largest cause of death in earthquakes of Bam, Roodbar, Manjil, Golbaf, and Tabas.”

On the other hand, there are some gentlemen who have luxurious villas and towers in the country. Their houses cost millions of dollars and their towers are facilitated with the most modern equipment. These villas and towers are designed and built for those who do not have the slightest financial concerns. They earn money and capitals by looting the money of those poor people who suffer from the bad housing in rural and urban areas.

Previous articleThe 1988 Massacre of Political Prisoners in Iran: Time for the Truth, Justice, Reparation and Guarantees of Non-Recurrence
Next articleAn Iran Regime’s School Closed in the UAE