Clash between shopkeepers and municipal agents in Iran capital 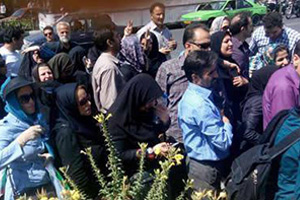 NCRI – A skirmish took place on Tuesday between shopkeepers and agents of the mullahs’ regime in the Iranian capital Tehran.

Harassment of a group of children carrying goods by municipal agents triggered a protest by shopkeepers in the area.

The shopkeepers first protested the arrest of the work-children by municipal agents and subsequently clashed with the agents, preventing the children’s arrest.

During this clash, one of the agents that had stolen the money of a child was beaten up, and eventually the municipal agents were forced to retreat.