Collecting Votes, Under the Pretext of ‘Charter of Citizens Rights,’ by Iran Regime President 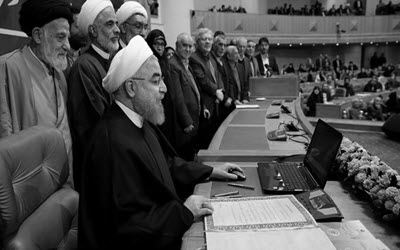 NCRI – The Iranian regime’s president, Hassan Rouhani, in his final months of presidency in a ridiculous act, under the pretext of Charter of Citizens Rights, tried to collect votes for the next presidential election against the rival faction.

He is trying in vain to take defensive guard for himself and his regime against the global Human Rights campaign and Justice Seeking Movement on 1988 massacre of 30,000 political prisoners in Iran and following disclosure of Mr. Montazeri’s audio file in this regard.

On Monday, December 19, Rouhani shamelessly and with complete obscenity while unveiling and signing the regime’s so-called Charter of Human Rights said: “This Citizens Rights would resonate the voice of Iranian nation against some pretentious western countries that think they have surpassed the third world nations on human and civil rights. The Citizens Rights announces to the world that the Islamic Republic of Iran has the capacity today to make good use of all features of the world’s new rights in the context of its Iranian and Islamic culture.”

Rouhani ruthlessly states his remarks on citizen’s rights and rule of law while the United Nations General Assembly has recently adopted the 64th resolution on human rights violations in Iran condemning the mullahs’ dictatorship for flagrant human rights abuse and rising number of executions in Iran.
In addition, representatives of the European Parliament and the United States Congress as well as international human rights bodies frequently issue statements condemning the human rights violations and crimes committed by the Iranian regime, and the calls to stop executions in Iran and trial of the mullahs’ regime leaders in international courts for crime against humanity are on the rise.