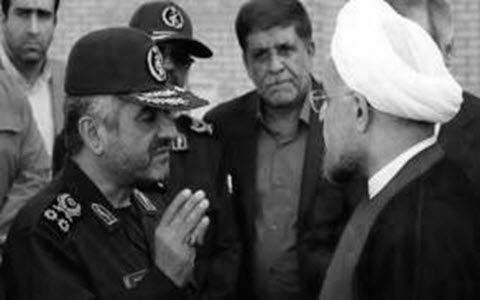 NCRI – While the Iranian regime’s president, Hassan Rouhani, praised the Iranian revolutionary guards (IRGC) on June 26 and said: “We must thank the IRGC for building strategic weapons and using them well,” the IRGC commander in chief in a reaction to Rouhani’s previous statements said: “If the government is ‘without a gun,’ it will be ‘humiliated’ and will ‘surrender’ to the enemies.”

On June 22, Rouhani in continuation of factional feuding over power in an implicit and tactical attack on the IRGC had said: “Part of the economy was in the hands of a government ‘without a gun’ and we handed it over to a government ‘with a gun.’ This is not economy and privatization. They were already afraid of the gun-free government, let alone ‘a government with a gun’ to which we have given control of the economy, a government that also had the media and everything else and nobody dared to compete with it.”

Rouhani’s intention of saying the ‘government with a gun’ was the government of Mahmoud Ahmadinejad, former president of the regime, who let the IRGC to control much of Iran’s economy.

In a reaction to Rouhani’s statements, Mohammad Ali Ja’fari, IRGC’s chief commander, said “We are not afraid of these rebukes,” and stated: “They may introduce us as the gun-owners, yes we are gun-owners and more than that we own the missiles that break the enemy and we use them against the enemy to protect the regime, … and protect the Islamic Iran’s security. We believe that a government that does not have guns will be ‘humiliated’ and will eventually ‘surrender’ to the enemies.”

The IRGC’s chief commander continued to attack Rouhani by calling him unfair and said: “The unfair attack on the Revolutionary Guards brings the idea to the minds that there are other objectives behind the attack but we just keep silent in order to maintain unity.”

“Messrs.… take memento photos with the development projects that IRGC builds while they owe billions of dollars (to the IRGC) for the projects and then they speak unfairly,” he added.

In an interview with IRGC affiliated FARS news agency on June 27, Ahmad Khorshidi Azad, director of a band called population servants of revolution, had attacked Rouhani and said: “Some don’t know that the government currently owes 32000 billion Tomans (~10 billion dollars) to (the IRGC’s) Khatam-ol-Anbiya construction headquarters and whenever they cannot finish their development project and become desperate they go to the headquarters.”

The conflict and factional feuding among the IRGC commanders and Rouhani have occurred repeatedly during Rouhani’s first term as the president in the past four years. While the IRGC commanders have repeatedly attacked the Joint Comprehensive Plan of Action (JCPOA) agreement, Rouhani considers JCPOA a great achievement for lifting sanctions, boosting the economy, and increasing security.

The Iranian regime’s recent missile attack on Deir ez-Zor in Syria has become a subject of new feuding and conflict between IRGC and Rouhani. While Rouhani stated that Iran’s retaliatory missile strike was “not the decision of an individual or a military organ,” but “such decisions are taken at the regime’s Supreme National Security Council,” the IRGC said in a statement that the attack was “coordinated by the headquarters of the armed forces under the command of the Supreme Leader.”

While admitting the gap and divide inside the regime, and while referring to the regime as the nation of Iran, the IRGC commander said: “In a situation where the nation of Iran more than ever needs the sacrifices of their soldiers and the power and authority of their guns and missiles, the unfair attack on the Revolutionary Guards brings the idea to the minds that there are other objectives behind the attack but we just keep silent in order to maintain unity. We feel that such statements are aimed at creating false bipolarity, evasion and running away from obligations, while these methods will no longer work.”

Meanwhile, Ali Akbar Kalantari, member of the regime’s Assembly of Experts, in an interview with FARS news agency referring to the new U.S. Senate bill said: “Experience has proven that whenever we back off, the enemy becomes embolden and more rude in their action.”

Kalantari then attacked Rouhani and said: “For example, the IRGC’s recent attack against Daesh (ISIS) will make the enemy passive for a long time. The country’s diplomacy men should also consider this point that if they back off against the enemy’s greed and become passive, they will take advantage of this passivity and hit us.”