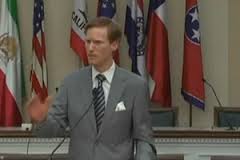 The greatest long-term threat to security in the Middle East is not the terrorist group ISIS but the Iranian regime, a US conflict expert has declared.

Dr Ivan Sheehan described the Iranian regime as the ‘real bully in the region’, and said President Barack Obama lacked strategy to cope with the larger threat from the clerical dictatorship.

He told Bloomberg TV: “I think the real long-term threat in the Middle East isn’t so much ISIS. It is Iran right next door. That is really what most concerns me.”

He also hailed the dwindling support for ousted Iraqi President Nouri al-Maliki, and said a legitimate Iraqi government, not American military intervention in the region, was the solution to the current regional crisis.

He added: “The lack of support for Maliki is a positive development for Iraq’s future.

“The concerns relating to rise of ISIS come from a noble place. I believe that bullies should not be allowed to have their way. What is troubling is the real bully in the region is Iran.

“What concerns me is Mr. Obama seems to lack strategy to counter the larger threat from the Iranian regime.

“I should note here, this is a regime that is pursuing nuclear weapons, a regime engaging in human rights abuses, a regime denying protections to ethnic minorities, a regime that retaliates against anyone that does not subscribe to their export of terrorism, instability and religious fundamentalism.

Dr Sheehan is director of the graduates programs in Negotiation and Conflict Management and Global Affairs and Human Security in the College of Public Affairs at the University of Baltimore.